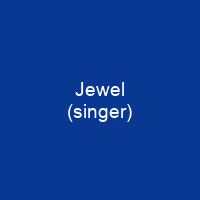 Jewel Kilcher is an American singer-songwriter, musician, actress, and author. Her debut album, Pieces of You, went on to become one of the best-selling debut albums of all time, going 12-times platinum. She has received four Grammy Award nominations and, as of 2015, has sold over 30 million albums worldwide.

About Jewel (singer) in brief

Jewel Kilcher is an American singer-songwriter, musician, actress, and author. She has received four Grammy Award nominations and, as of 2015, has sold over 30 million albums worldwide. Kilcher was raised near Homer, Alaska, where she grew up singing and yodeling as a duo with her father, a local musician. Her debut album, Pieces of You, went on to become one of the best-selling debut albums of all time, going 12-times platinum. The Kilcher family is featured on the Discovery Channel show Alaska: The Last Frontier, which chronicles their day-to-day struggles living in the Alaskan wilderness. Jewel has also had endeavors in writing and acting; in 1998 she released a collection of poetry, and the following year appeared in a supporting role in Ang Lee’s Western film Ride with the Devil. She is a cousin of actress Q’orianka Kilcher and her father is originally from Alaska, though the family stopped attending The Church of Jesus Christ of Latter-day Saints after her parents’ divorce when she was eight years old. Her paternal grandfather, Yule Kilcher, was a delegate to the Alaska constitutional convention and a state senator who settled in Alaska after emigrating from Switzerland. She also has a half-brother, Nikos, who was primarily raised in Oregon by his mother, with whom her father had a brief relationship; Jewel would later become close to him in adulthood. Jewel released her first independent album, Lullaby, in 2009. In 2003, she released 0304, which marked a departure from her previous folk-oriented records, featuring electronic arrangements and elements of dance-pop.

She later released Perfectly Clear, her first country album; it debuted atop Billboard’s Top Country Albums chart and featured three singles, \”Stronger Woman\”, \”I Do\”, and \”‘Til It Feels Like Cheating\”. In her youth, Kilcher learned to yodel from her father; they also sang at hotels in Anchorage, including the Hotel Captain Cook and the Hilton Anchorage. At age fifteen, she received a partial scholarship at the Interlochen Arts Academy in Michigan. She would later credit the time she spent in bars as integral to her formative years as she saw women who would compromise themselves for compliments, flattery, or men who would run away from men. She was referred to a dance studio in Anchorage by the instructor at the academy, who referred her to a studio at a dance club in Anchorage where she would sing and dance until they ultimately killed themselves by drinking themselves until they were too drunk to go on. Her father was a musician, and she would sometimes earn a living singing in roadhouses and taverns as a first-daughter duo. Her parents had been living in Utah with her elder brother, Shane; her father was attending Brigham Young University. At the time of her birth, the family relocated to Anchorage, Alaska. There, her younger brother Atz Jr. was born. She is the second child of Attila Kuno ‘Atz’ Kilcher.

You want to know more about Jewel (singer)?

This page is based on the article Jewel (singer) published in Wikipedia (as of Dec. 08, 2020) and was automatically summarized using artificial intelligence.