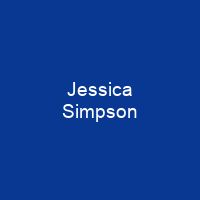 Jessica Ann Johnson is an American singer, actress, fashion designer, and author. She is known for her relationship and later marriage to Nick Lachey. Simpson is married to Eric Johnson, with whom she shares three children. She auditioned for The Mickey Mouse Club at the age of twelve.

About Jessica Simpson in brief

Jessica Ann Johnson is an American singer, actress, fashion designer, and author. After performing in church choirs as a child, Simpson signed with Columbia Records in 1997, at age 16. During her earlier career, Simpson became known for her relationship and later marriage to Nick Lachey. She also starred on the reality television series The Price of Beauty in 2010, was a judge on two seasons of Fashion Star between 2012 and 2013, and published a memoir in 2020, Open Book. Simpson is married to Eric Johnson, with whom she shares three children. She is the daughter of Tina Ann Simpson and Joseph Simpson, a psychologist and Baptist youth minister. Simpson has stated that she grew up in Dallas and Waco, Texas, but her parents now live in McGregor, Texas. Her father would often take in unwed mothers for periods of time to provide them shelter. She was given a purity ring by her father when she was twelve years old. Simpson and her family moved frequently due to her father’s job, though they remained in Texas for the most part, they did live in the midwest for a few years. She attended J. Pearce High School in her teenage years, though she had to drop out in 1997 as her career began to take off. In 2005, Simpson launched The Jessica Simpson Collection, a fashion line of clothing and other items. The brand has gone on to earn over USD 1 billion in revenue. In 2006, she released her fifth studio album A Public Affair and appeared in the romantic comedy film Employee of the Month.

With the release of her sixth studio album Do You Know, Simpson moved into the country music genre. Simpson made her film debut as Daisy Duke in The Dukes of Hazzard, for which she recorded a cover of \”These Boots Are Made for Walkin’\” for the film’s soundtrack. She has a younger sister, Ashlee Simpson, who is also a singer-songwriter. Simpson was a semi-finalist for the show alongside artists such as Britney Spears, Christina Aguilera, and Justin Timberlake. She auditioned for The Mickey Mouse Club at the age of twelve, auditioning with a performance of \”Amazing Grace\” and dancing to \”Ice Ice Baby\”. She advanced through multiple rounds, eventually being a Semi-finalists on the show. Simpson’s debut album, Sweet Kisses, sold two million copies in the United States and saw the success of the single \”With You\”, which topped the Mainstream Top 40 chart. Her second studio album Irresistible became her second top 20 entry on the Billboard Hot 100, while the album was certified gold by the Recording Industry Association of America. In This Skin, Simpson’s third studio album, sold three million copies. She performed with Proclaim Records, and began touring to promote the album with Dolly Parton. She later claimed that the size of her breasts led her to quit touring as she had been deemed too sexual for the genre for the album.

You want to know more about Jessica Simpson?

This page is based on the article Jessica Simpson published in Wikipedia (as of Jan. 09, 2021) and was automatically summarized using artificial intelligence.