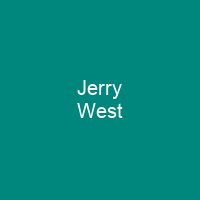 Jerome Alan West is an American basketball executive and former player. He played professionally for the Los Angeles Lakers of the National Basketball Association. West holds the NBA record for the highest points per game average in a playoff series with 46. 3. He was the co-captain of the 1960 U.S. Olympic gold medal team, a squad inducted as a unit in 2010.

About Jerry West in brief

Jerome Alan West is an American basketball executive and former player. He played professionally for the Los Angeles Lakers of the National Basketball Association. After his playing career ended, West took over as head coach of the Lakers for three years. In 2002, West became general manager of the Memphis Grizzlies and helped the franchise win their first-ever playoff berths. West was inducted into the Naismith Basketball Hall of Fame in 1980 and voted as one of the 50 Greatest Players in NBA history in 1996. West holds the NBA record for the highest points per game average in a playoff series with 46. 3. He was the co-captain of the 1960 U.S. Olympic gold medal team, a squad inducted as a unit in 2010. West’s son, Jonnie, played college basketball for West Virginia. West has stated that for a time he slept with a loaded shotgun under his bed out of fear that he might have to kill his father in self-defense. His older brother, David, was killed in action in the Korean War, and the trauma turned West into a shy and introverted boy. West spent his days shooting baskets from every possible angle, ignoring mud and snow in the backyard, as well as his mother’s whippings when he came home hours late for dinner; he played so often that the NBA acknowledged it as \”obsessive\”. He was so small, frail, and weak that he needed many vitamin injections from his doctor and was kept apart from children’s sports, to prevent him from getting seriously injured.

West became the state’s first high-school player to score more than 900 points in a season, with an average of 32 points a game. He is also the only player in NBA History to be named Finals MVP despite being on the losing team. West was named All-Star MVP in 1972, the same year that he won the only title of his career. His nicknames included \”Mr. Clutch\”, for his ability to make a big play in a clutch situation, such as his famous buzzer-beating 60-foot shot that tied Game 3 of the 1970 NBA Finals against the New York Knicks; \”the Logo\”, in reference to his silhouette being incorporated into the NBA logo; and \”Zeke from Cabin Creek\”, for the creek near his birthplace of Chelyan, West Virginia, where he grew up. West is the father of Jonnie West, a professional basketball player who played for the West Virginia Mountaineers from 2007 to 2009. He also has a son, David West, who played basketball for the University of West Virginia from 2006 to 2008. He has a daughter, Jennifer West, and a son-in-law, Michael West, both of whom play for the New Jersey Nets and New York City Knicks. West won the NBA Executive of the Year Award twice, once as a Lakers manager and then as a Grizzlies manager. His son Jonnie played collegeasketball for West Virginia and is a former All-American.

You want to know more about Jerry West?

This page is based on the article Jerry West published in Wikipedia (as of Jan. 04, 2021) and was automatically summarized using artificial intelligence.