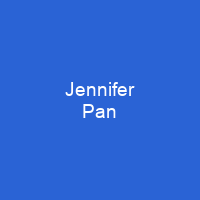 Jennifer Pan was convicted of a 2010 kill-for-hire attack targeting both of her parents. The crime took place at the Pan residence in Unionville, Markham, Ontario, in the Greater Toronto Area. Pan’s parents were Chinese diaspora immigrants to Canada.

About Jennifer Pan in brief

Jennifer Pan was convicted of a 2010 kill-for-hire attack targeting both of her parents. The crime took place at the Pan residence in Unionville, Markham, Ontario, in the Greater Toronto Area. Pan’s parents were Chinese diaspora immigrants to Canada. Hann Huei Pan was born and educated in Vietnam, moving to Canada in 1979 as a political refugee. Bich also immigrated as a refugee. The couple were married in Toronto and lived in Scarborough. The Pans found work at Magna International, an auto parts manufacturer in Aurora, Ontario. Hann worked as a tool and die maker, while Bich made car parts. Jennifer was made to take piano lessons at the age of four, as well as figure skating classes where she trained most days during the week. She had hopes of becoming an Olympic figure skating champion until she tore a ligament in her knee. Despite her parents’ high expectations and that Jennifer had received good grades in lower school, throughout high school her grades were somewhat average except for music. When Jennifer failed calculus class in grade 12, Ryerson University rescinded her early admission. As she could not bear to be perceived as a failure, she began to lie to those she knew, including her parents, and pretended she was attending university. Jennifer told her parents she had won scholarships, later falsely claiming that she had accepted an offer into the pharmacology program at the University of Toronto. She went to the extent of purchasing second-hand textbooks and watching videos related to pharmacology in order to create notebooks full of purported class notes.

Jennifer also requested permission from her parents to stay near the campus with a friend throughout the week with her boyfriend, Daniel Chi-Kwong Wong, whom she had met in high school. In a state of shock, Hann wanted to throw Jennifer out of the house, but her mother persuaded him to allow her to stay. On one occasion, Bich and Bich became suspicious when they realized that she did not have a hospital ID badge or uniform. Jennifer and her friends reportedly regarded this upbringing as restrictive and greatly oppressive. Jennifer had never gone to a club, been drunk, visited a friend’s cottage or gone on vacation without her family. She was not permitted to date boys while attending high school, or to attend high school dances out of fear that these activities would distract her from her academic commitments. Jennifer’s parents set many goals for their children and had extremely high expectations of them. They had accumulated USD 200,000 in savings. They were thrifty and by 2004 were financially stable enough to purchase a large house with a two-car garage on a residential street in Markham,. a city with a large Asian population. The couple persistently worked hard for their money to ensure that their children had the upbringing and opportunities they themselves had missed out on. They had a Lexus ES 300 and Hann drove a Mercedes-Benz C-Class.

You want to know more about Jennifer Pan?

This page is based on the article Jennifer Pan published in Wikipedia (as of Dec. 26, 2020) and was automatically summarized using artificial intelligence.