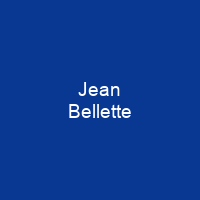 Jean Bellette was an Australian artist. A modernist painter, she was influential in mid-twentieth century Sydney art circles. She frequently painted scenes influenced by the Greek tragedies of Euripides and Sophocles and the epics of Homer. The only woman to have won the Sulman Prize more than once.

About Jean Bellette in brief

Jean Bellette was an Australian artist. A modernist painter, she was influential in mid-twentieth century Sydney art circles. She frequently painted scenes influenced by the Greek tragedies of Euripides and Sophocles and the epics of Homer. The only woman to have won the Sulman Prize more than once, Bellette claimed the accolade in 1942 with For Whom the Bell Tolls, and in 1944 with Iphigenia in Tauris. She helped found the Blake Prize for Religious Art, and was its inaugural judge. Bellette married artist and critic Paul Haefliger in 1935. The couple moved to Majorca in 1957; although she visited and exhibited in Australia thereafter, she did not return there to live, and became peripheral to the Australian art scene. Her choice of subject matter and approach placed her at odds with mainstream modernism, while she seemed to shun explicit links between the classical and the Australian. In 1946, her paintings were hung in at least four separate exhibitions. In 1948 she created a textile design, titled Pericles of Tyre, for a production of Shakespeare’s Pericles. Her work was not well reviewed, though she was not successful in winning the Sir John Sulman prize again in 1942. Her works hung in the Sydney Art Group, a network of fashionable moderns whose membership included William Dobell and Russell Drysdale. In 1938, she and her husband studied life drawing at Académie de la Grande Chaumière in Paris.

She painted and held regular shows – “a solo show every second year and a group show every year at the Macquarie Galleries”. Her husband served as art critic for The Sydney Morning Herald for a decade and a half. The artist’s most distinctive feature of the artist’s work was this choice of classical subjects. Critics identified the influence of European modernists Aristide Maillol and Giorgio de Chirico, as well as Italian Quattrocento painters Masaccio and Piero della Francesca, about some of whom Bellette wrote articles in the journal Art in Australia. Her paintings were generally positive, but there were some reservations, particularly that her approach might be settling upon a formula in her works, and then repeating the formula in later years. She was married to artist Paul Haeferliger from 1935 to 1957, and they lived in Majorca, where they had a son, Paul, who was born in 1958. Her husband was a well-known critic and art dealer in Sydney, and she was a member of the Art Society of Australia. She died in 2011, at the age of 89. She is survived by her husband and her son, Paul Haeferli. She also had a daughter, Julie, who lives in Sydney. She worked as a teacher at the Julian Ashton Art School in Sydney and at the London School of Art, where she studied under painters Bernard Meninsky and Mark Gertler.

You want to know more about Jean Bellette?

This page is based on the article Jean Bellette published in Wikipedia (as of Oct. 31, 2020) and was automatically summarized using artificial intelligence.