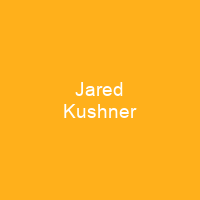 Jared Corey Kushner is an American investor, real estate developer, and newspaper publisher. He is a senior advisor to his father-in-law, Donald Trump, the 45th president of the United States. He stirred controversy for his conflicts of interest, as he continued to engage in business, even profiting on policy proposals that he himself pushed for within the administration.

About Jared Kushner in brief

Jared Corey Kushner is an American investor, real estate developer, and newspaper publisher. He is a senior advisor to his father-in-law, Donald Trump, the 45th president of the United States. Kushner is the son of the former real-estate developer Charles Kushner and is married to Ivanka Trump, President Trump’s daughter and fellow advisor. As a result of his father’s conviction and incarceration for fraud, he took over management of his real estate company Kushner Companies, which launched his business career. He later also bought Observer Media, publisher of the New York Observer. In 2017, he was named as a senior White House advisor, raising concerns about nepotism. He stirred controversy for his conflicts of interest, as he continued to engage in business, even profiting on policy proposals that he himself pushed for within the administration. Kushner authored the Trump peace plan in the Israeli-Palestinian conflict, which was announced in January 2020 and widely viewed as highly favorable for Israel. As of 2019, Kushner’s net worth is estimated at about USD 800 million. His paternal grandparents, Reichel and Joseph Kushner, were Holocaust survivors who came to the U.S. in 1949 from Navahrudak, now in Belarus. His maternal grandfather Morris Stadtmauer was Jared’s maternal grandfather. He was elected into the Fly Club, supported the campus Chabad house, and bought and sold real estate in Somerville, Massachusetts, as a vice president of Somerville Building Associates. He graduated from Harvard in 2003 with a Bachelor of Arts degree in government.

Kushner enrolled in a joint Juris DoctorMaster of Business Administration program coordinated between New York University School of Law and New York. University Stern School of Business. He graduated in 2007 with dual JDMBA degrees. Kushner interned at Manhattan District Attorney Robert Morgenthau’s office, and with the New York law firm Paul, Weiss, Rifkind, Wharton & Garrison. He assumed the role of CEO of Kushner Companies in 2008. He purchased the office building at 666 Fifth Avenue in 2007, for a then-record price of USD 1.8 billion, most of it borrowed. He set about expanding the business and purchased almost USD 7 billion in property over the next ten years, much of it in New York City. In May 2015, he purchased 50% of the Times Square Building from Africa Israel Investments Ltd for USD 295million. In August 2014, he acquired a three-building apartment portfolio in Middle River, Maryland, for USD 38 million with Goldman Sachs and George Soros, a top Democratic Party donor. In early 2015, Kushner, with his brother Joshua Williams, co-founded Cadre, an online real- estate investment platform. He pushed strongly for the First Step Act, a criminal justice reform bill which Trump signed into law in 2018. Kushner has played an influential role in the Trump administration’s COVID-19 response to the Middle East Peace Process, leading to the signing of the Abraham Accords in 2020. His father made a donation of USD 2.5 million to the University in 1998, not long before Jared was admitted.

You want to know more about Jared Kushner?

This page is based on the article Jared Kushner published in Wikipedia (as of Jan. 04, 2021) and was automatically summarized using artificial intelligence.