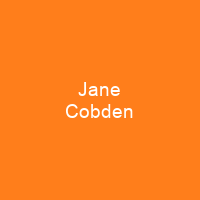 Emma Jane Catherine Cobden was a British Liberal politician. She was an early proponent of women’s rights. In 1889 she was one of two women elected to the inaugural London County Council. As a convinced anti-imperialist she opposed the Boer War of 1899–1902. In 1928 she presented the old Cobden family residence, Dunford House, to the Cobden Memorial Association.

About Jane Cobden in brief

Emma Jane Catherine Cobden was a British Liberal politician. She was an early proponent of women’s rights. In 1889 she was one of two women elected to the inaugural London County Council. The battle for women’s suffrage on equal terms with men was her most enduring cause. As a convinced anti-imperialist she opposed the Boer War of 1899–1902. After her marriage to the publisher Thomas Fisher Unwin in 1892 she extended her range of interests into the international field. In 1928 she presented the old Cobden family residence, Dunford House, to the Cobden Memorial Association as a conference and education centre dedicated to the issues and causes that had defined Cobdenism. Jane Cobden is the third daughter and fourth child of Richard Cobden, who at the time of her birth was a Radical MP for the West Riding. Her mother was Catherine Anne, née Williams, the daughter of a timber merchant from Machynlleth in Wales; the older Cobden children were Richard, born 1841; Kate, born 1844; and Ellen,. born 1848. In April 1856 Dick, who was at school at Weinheim in Germany, died there after a short illness. The news was a devastating shock to the family, and caused Richard’s temporary withdrawal from public life. He returned to the House of Commons in May 1859, as Liberal MP for Rochdale. He was saved from bankruptcy by a public subscription which not only settled his debts but also enabled him to acquire the farmhouse in which he had been born in 1804, at Dunford, near Heyshott in Sussex.

Two further daughters followed Jane: Anne, born1853, and Lucy, born 1861. There followed a time of financial uncertainty, eventually resolved by a domestic pension, and eventually a few weeks before Jane’s 14th birthday. She remained committed throughout her life to the \”Cobdenite\” issues of land reform, peace, and social justice. In the years prior to the First World War she opposed Joseph Chamberlain’s tariff reform crusade on the grounds of her father’s free trade principles, and was prominent in the Liberal Party’s revival of the land reform issue. Her younger sister Anne, at the ages of 12 and 10 respectively, taught classes in local village school. The girls were encouraged by their father to contribute what they possessed to relieve local poverty to relieve the local poverty  as you have now made up your minds to give it to poor sufferers, let your own neighbours tell you how to dispose of it, and tell me all about it. Richard died after a severe bronchial attack on 2 April 1865, just a few days before his birthday. His letters indicate that he felt warmly towards them and that he wished to direct their political education. In later years they would all acknowledge his influence over their ideas. He was a somewhat remote figure to his daughters, although his letters indicated that hefelt warmly  towards them.

You want to know more about Jane Cobden?

This page is based on the article Jane Cobden published in Wikipedia (as of Dec. 09, 2020) and was automatically summarized using artificial intelligence.