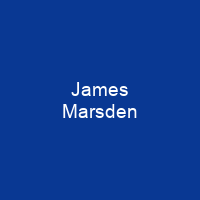 James Paul Marsden is an American actor, singer, and former model. He gained prominence in the early 2000s with his portrayal of Cyclops in the X-Men film series. In 2013, Marsden portrayed President John F. Kennedy in Lee Daniels’s The Butler.

About James Marsden in brief

James Paul Marsden is an American actor, singer, and former model. He gained prominence in the early 2000s with his portrayal of Cyclops in the X-Men film series. Marsden went on to star in various genre films, including Hairspray and The Notebook. In 2013, Marsden portrayed President John F. Kennedy in Lee Daniels’s The Butler. He starred as gunslinging sentient android Teddy Flood in the HBO science fiction series Westworld as part of the main ensemble. He has starred in the films Disturbing Behavior opposite Katie Holmes and Gossip opposite Kate Hudson. Since 2019, he has starred as Steve and Ben Wood in the Netflix black comedy series Dead to Me. He also sang two songs for the film’s soundtrack which has been certified Platinum by the RIAA. He lost out to Edward Norton for a role in Primal Fear and turned down the lead role in 54, which then went to Ryan Phillippe.

He attended Hefner Middle School and Putnam City North High School, in Oklahoma City, and later went to Oklahoma State University, where he studied broadcast journalism. He was also a member of Delta Tau Delta fraternity, but left after one and a half years, opting instead to move to Los Angeles in order to pursue his acting career. His father, a food safety advisor to LexiGene Industries, and his mother, a nutritionist, divorced when he was nine years old, and he has four siblings: two younger sisters and two brothers. In 2004, he co-starred with Rachel McAdams, Ryan Gosling, James Garner, and Gena Rowlands in romantic drama The Note book. In 2007, he played Corny Collins in the film adaptation of the 1988 John Waters film of the same name, Allie Hamilton.

You want to know more about James Marsden?

This page is based on the article James Marsden published in Wikipedia (as of Dec. 13, 2020) and was automatically summarized using artificial intelligence.