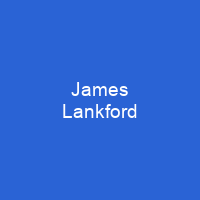 James Paul Lankford is an American politician serving as the junior United States Senator from Oklahoma. He previously served as the U.S. Representative for Oklahoma’s 5th congressional district from 2011 to 2015. He is married to former Oklahoma City Mayor Mary Fallin, a Republican. He has two children and a stepson.

About James Lankford in brief

James Paul Lankford is an American politician serving as the junior United States Senator from Oklahoma since 2015. He previously served as the U.S. Representative for Oklahoma’s 5th congressional district from 2011 to 2015. In January 2014, Lankford announced he would run in the 2014 Senate special election to succeed retiring Republican Senator Tom Coburn. He won the special election with nearly 68% of the vote and was elected to the balance of Coburn’s term. Lankford was reelected in 2016, again with almost 68%. He was named chairman of the House Republican Policy Committee, the fifth-ranking position in the House GOP caucus, an unusually senior position for a second-term House member. In 2014 Lankford endorsed the National Rifle Association and had an \”A\” rating for his consistent support of pro-gun legislation. After the 2018 Stoneman Douglas High School shooting, he opposes a controversial method of microstamping, which used a unique marking to match a specific firearm, and would allow veterans to register their guns. He opposes loosening restrictions on interstate gun purchases and supports the repeal of the new income and estate tax.

He supports lowering taxes and reducing government spending. He took the taxpayer protection pledge promising to support no new taxes and supports a new tax on earnings or savings. He is married to former Oklahoma City Mayor Mary Fallin, a Republican. He has two children and a stepson. He was married to Oklahoma City City Councilwoman Vicki Lankford, a Democrat, until she ran for governor in 2010. He also has a son and a daughter, both of whom he has raised on their own. He lives in Edmond, a suburb of Oklahoma City, where he still lives. He earned a Bachelor of Science degree in Secondary Education at University of Texas at Austin in 1990, and a master’s degree in Divinity at Southwestern Baptist Theological Seminary in 1994. From 1996 to 2005, he was the program director of Falls Creek, the largest Christian camp in the United States. He worked for the Baptist General Convention of Oklahoma and was the director of the youth programming at Falls Creek.

You want to know more about James Lankford?

This page is based on the article James Lankford published in Wikipedia (as of Dec. 08, 2020) and was automatically summarized using artificial intelligence.