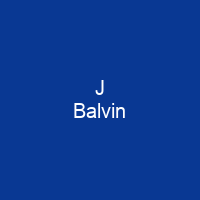 José Álvaro Osorio Balvín, better known as J Balvin, is a Colombian reggaeton singer. He is one of the best-selling Latin music artists with sales of more than 35 million records worldwide. In 2020, he was included in Time magazine’s 100 Most Influential People of that year and as one of The Greatest Latin Artists Of All Time by Billboard.

About J Balvin in brief

José Álvaro Osorio Balvín, better known as J Balvin, is a Colombian reggaeton singer. He is one of the best-selling Latin music artists with sales of more than 35 million records worldwide. He has won five Billboard Latin Music Awards, four Latin Grammy Awards, two MTV Video Music Awards and four Latin American Music Awards. In 2020, he was included in Time magazine’s 100 Most Influential People of that year and as one of The Greatest Latin Artists Of All Time by Billboard. He grew up listening to rock groups such as Metallica and Nirvana, and incorporates the grunge aesthetic into his personal style, having a Nirvana tattoo on his knee. Despite working with many English-speaking artists such as Beyoncé, Pharrell Williams, The Black Eyed Peas, Cardi B, Dua Lipa and Major Lazer, he continues to sing almost exclusively in Spanish, and hopes to introduce Spanish-language music to a global audience. In June 2017, he released the single \”Mi Gente\” with Willy William, which topped the Global Top 50 on Spotify, and later reached one billion views on YouTube. His most recent album Colores will be released in March 2020. He was born into a middle-class family in Medellín, Colombia on May 7, 1985. His father’s business went bankrupt, and the family lost their home and car, requiring the family to move to a poorer neighborhood.

On this period of his life, he notes, “I’m someone from the rich people they see me as. It’s like moving between worlds between worlds. I feel equally comfortable in both worlds.’” He has collaborated with Latin American artists like Ozuna, Nicky Jam, Alejandro Sanz, Bad Bunny and Pitbull. His breakthrough came in 2014 with “Ginza’ and the single “6 AM” which peaked at number 2 on the Billboard Hot Latin Songs chart following with “Ay Vamos” and “Sigo Extrañándote’”. He has been called the “Prince of Reggaeton” by the Guinness World Records and is considered to be a “leader of a second-generation reggaeteton’” He is also noted for his eclectic and colorful fashion sense, and is known for his colorful clothes and accessories. He moved to the United States at age 17 to learn English, where he lived in both Oklahoma and New York. He became fascinated by the business savvy of New York, and participated in an English-exchange program in Oklahoma. Soon after, he moved to New York to study English and music, living with an aunt on Staten Island and working as a dog walker with an 50-year-old woman. He also became the first Latino to headline world-musical events such as Coachella, Tomorrowland, and Lollapalooza. In January 2018, hereleased the hit single \”Machika\” featuring Jeon and Anitta.

You want to know more about J Balvin?

This page is based on the article J Balvin published in Wikipedia (as of Jan. 04, 2021) and was automatically summarized using artificial intelligence.