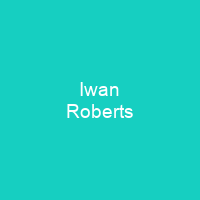 Iwan Wyn Roberts is a Welsh former professional footballer. He played as a striker from 1986 to 2005 for a number of clubs and the Welsh national team. Roberts made 647 league appearances during his career, almost half of which were for Norwich City. He was elected to the Norwich City F. C. Hall of Fame in 2002.

About Iwan Roberts in brief

Iwan Wyn Roberts is a Welsh former professional footballer. He played as a striker from 1986 to 2005 for a number of clubs and the Welsh national team. Roberts made 647 league appearances during his career, almost half of which were for Norwich City. He was elected to the Norwich City F. C. Hall of Fame in 2002. Since retiring as a player, Roberts has worked as a commentator for Sky Sports and BBC Radio Cymru. His book, All I Want for Christmas, prompted both controversy and praise when it was published in 2004. Roberts says that most football fans would know him as \”that gap-toothed ginger lunk\”. He started losing his front tooth when he was just 10: his best friend’s heel chipping half of his tooth off, the result of an incident playing football. Roberts credits his school PE teacher, Iolo Olin, for introducing him into men’s football aged 15. He lost his second front tooth after an elbow to the mouth from Darran Rowbotham in a pre-season friendly at Watford in 1988. Roberts played for Watford as a trainee before signing his first professional contract in July 1986. He made his first-team debut during the 1985–86 season and scored his first goal in professional football on 16 September 1986; it was the only goal in a 1–0 win against Manchester United at Vicarage Road. He moved to Huddersfield Town in 1990 where he remained for three seasons before transferring to Leicester City. Roberts signed for Wolverhampton Wanderers after three further seasons, but stayed for a single campaign.

He then transferred to Norwich City, where he spent seven years. He amassed fifteen caps for Wales between 1989 and 2001, without scoring. Roberts has also played for Gillingham and on loan to Cambridge United. He speaks fluent Welsh, and has been a commentator on Sky Sports, BBC RadioCymru and BBC Cymri Wales since retiring. He has also been a pundit for ITV and Sky Sports. He is a member of the Welsh Football Association and the Football Association of Wales. Roberts is also a director of the Football League’s Player Development Trust and is an ambassador for the Football Club of Wales (FCW), which promotes the development of young players in the Welsh game. He also has a role as a coach for the Welsh National Football Association (WNT) and the Wales Under 21s. He says: “I’m a big fan of the WNT. I’ve got a lot of respect for the club and the players they’re trying to achieve.” He has been involved with the Welsh FA since he was a teenager and is now a WNT ambassador. Roberts was also involved in the creation of the ‘Welsh Football Association’, which promotes Welsh football in the UK and abroad. He said: ‘I have had a great deal of success in football since I was a young player.’ He is also involved with WNT, the Wales Football Association, the FA of Wales and the Welsh Football League.

You want to know more about Iwan Roberts?

This page is based on the article Iwan Roberts published in Wikipedia (as of Dec. 07, 2020) and was automatically summarized using artificial intelligence.