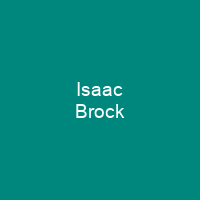 Major-General Sir Isaac Brock KB was a British Army officer and colonial administrator from Guernsey. He commanded his regiment in Upper Canada successfully for many years. He was promoted to major general, and became responsible for defending Upper Canada against the United States. Brock died at the Battle of Queenston Heights, which the British won.

About Isaac Brock in brief

Major-General Sir Isaac Brock KB was a British Army officer and colonial administrator from Guernsey. Brock was assigned to Lower Canada in 1802. Despite facing desertions and near-mutinies, he commanded his regiment in Upper Canada successfully for many years. He was promoted to major general, and became responsible for defending Upper Canada against the United States. Brock died at the Battle of Queenston Heights, which the British won. His actions, particularly his success at Detroit, earned him accolades including a knighthood in the Order of the Bath and the sobriquet \”The Hero of Upper Canada\”. His name is often linked with that of the Native American leader Tecumseh, although the two men collaborated in person only for a few days. He kept a reputation as an unusually tall, robust man throughout his life, with an adult height of about 6 ft 2 in. At his death he had a waist size of 47 inches and the inside brim of his hat measured 24 inches in circumference. Though Brock was noted as a handsome man who enjoyed the company of women, he never married. Brock had a successful pre-war military career and a quick rise through the ranks, which many commented on at the time. Some credited luck and others skill in his rapid promotions, and Brock had substantial portions of both on his way to prominence. Brock’s ability to gain promotions even when the nation was at peace attests to his skills in recruiting men and organizing finances, and ambition.

He purchased his majority of Jersey on 27 June 1795, and purchased the majority of the West Indies on 28 October 1797 for £3,3,000. He spent much of his time in the Caribbean, where he fell ill with fever and did not recover until after returning to England in 1793. Brock earned a reputation during his early education as an assiduous student, as well as an exceptional swimmer and boxer. He also studied for one year in Rotterdam, learning French. At the time of his death, he owned a modest library of books, including classic works by Shakespeare, Voltaire, and Samuel Johnson. Brock joined the 8th Regiment of Foot on 8 March 1785 with the rank of ensign, and was likely given responsibility for the regimental colours. His elder brother John was already an officer in the same regiment. On 16 January 1790 he bought the rank. of lieutenant and later that year he raised his own company of men. As a result, he was promoted. to captain on 27 January 1791 and transferred to the 49th Regiment offoot on 15 June 1791. His nephew and biographer asserts that a professional dueller forced a match on him. As the one being challenged Brock had his choice of terms, and he insisted that they use pistols. His friends were shocked as Brock was a large target and his opponent an expert shot. Brock, however, refused to change his mind.

You want to know more about Isaac Brock?

This page is based on the article Isaac Brock published in Wikipedia (as of Dec. 04, 2020) and was automatically summarized using artificial intelligence.