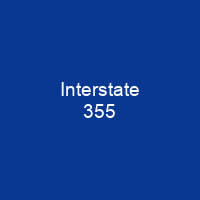 I-355 runs from I-80 in New Lenox north to I-290 in Itasca, a distance of 32. 5 miles. With the exception of a four-mile expansion in 2009, the highway is six lanes wide for its entire length. The tollway authority opened I-355 as the North–South Tollway in 1989 to ease congestion on Illinois Route 53 in central DuPage County.

About Interstate 355 in brief

I-355 runs from I-80 in New Lenox north to I-290 in Itasca, a distance of 32. 5 miles. With the exception of a four-mile expansion in 2009, the highway is six lanes wide for its entire length. The tollway authority opened I-355 as the North–South Tollway in 1989 to ease congestion on Illinois Route 53 in central DuPage County. On November 11, 2007, the tollway Authority opened a southern extension of I- 355, which runs 12.5 miles between I-55 and I- 80. In June 1984, Republican minority leader of the Illinois House of Representatives James “Pate” Philip helped push through legislation authorizing the construction of the tollways. Officials at the Morton Arboretum, one of the nation’s premier woodland research centers, promptly filed a federal lawsuit to block construction. In April 1985, the two agencies came to an agreement regardingConstruction of the new tollway. To protect the arboretums from salt spray and other pollutants caused by cars on the toll highway, the Tollway authority agreed to build I-35 below grade around the perimeter of the ar boretum. In January 1986, the. tollway paid out $2.5million to fund a trust fund as part of the settlement to help finance the arBoretum’s new programs. The U.S. Army Corps of Engineers released a preliminary environmental impact statement on March 13, 1986, for the new highway. In March 1986, a public hearing was held to discuss the impact of the highway on the nearby streams and lakes.

The new highway helped cut travel times for commuters traveling north and south in the county. It is located in the western and southwest suburbs of Chicago in the U. S. state of Illinois. The highway was defined in the Chicago Area Transportation Study Transportation Plan of April 1962. Most of these corridors, including the Des Plaines River expressway, the Crosstown Expressway running north–south along the west side of Chicago, and most of a proposed northern extension of IL 53 were scrapped because of intense local opposition. In 1979, Chicago mayor Jane Byrne canceled plans for the proposed Crosstownexpressway. Following the move, Congress gave the rights to half of the USD 200 million ) that had been earmarked for the Crosster Expressway to Du Page County. The officials then handed authority for the project over to the tollroad authority, and spent the money on other projects in the County. In exchange for the land, DuPage. County agreed to a 99-year lease providing 189 acres of its land to develop anurban vegetation laboratory. The land is now known as the Illinois State Toll Highway Authority’s “urban Forest Pres Preserve” Under the agreement, Morton. Arboreum agreed to charge one day of the week of the year to build a bicycle path to the nearby forest preserves, and begin a clean-streams program to improve water quality of DuPage’s lakes and streams.

You want to know more about Interstate 355?

This page is based on the article Interstate 355 published in Wikipedia (as of Dec. 07, 2020) and was automatically summarized using artificial intelligence.