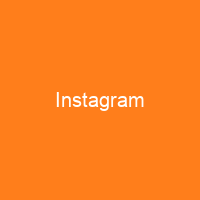 Instagram is an American photo and video sharing social networking service owned by Facebook. The app allows users to upload media that can be edited with filters and organized by hashtags and geographical tagging. In April 2012, Facebook acquired the service for approximately US$1 billion in cash and stock. As of January 2019, the Stories feature is used by 500 million users daily.

Instagram is an American photo and video sharing social networking service owned by Facebook. The app allows users to upload media that can be edited with filters and organized by hashtags and geographical tagging. Posts can be shared publicly or with pre-approved followers. Users can browse other users’ content by tags and locations and view trending content. In April 2012, Facebook acquired the service for approximately US$1 billion in cash and stock. As of January 2019, the Stories feature is used by 500 million users daily. The most followed person on Instagram is footballer Cristiano Ronaldo with over 253 million followers. Instagram became the 4th most downloaded mobile app of the 2010s. It has been the subject of criticism, most notably for policy and interface changes, allegations of censorship, and illegal or improper content uploaded by users. It was reported that 80% of Instagram’s users are located outside the U.S. and that it was reported it was the fourth most popular mobile app in the world in 2014. It is the most popular social networking site in the United States, followed by Twitter, Facebook, Snapchat, and Snapchat, with over 40 billion photos and videos uploaded as of October 2015. The most-liked photo is a picture of an egg, posted by the account @world_record_egg, created with the sole purpose of surpassing the previous record of 18 million likes on a Kylie Jenner post. The picture currently has over 54  million likes.

Instagram was created by Kevin Systrom and Mike Krieger and originally launched on iOS in October 2010. The Android version was released in April 2012. A feature-limited desktop interface was launched in November 2012, a Fire OS app in June 2014, and an app for Windows 10 in October 2016. On 3, 2012, Instagram released a version of its app for Android phones it was downloaded more than one million times in less than one day. On March 5, 2010, Systrom closed a USD 500,000 seed funding round with Baseline Ventures and Andreessen Horowitz while working on Burbn. In February 2011, Instagram had raised USD 7 million in Series A funding from a variety of investors, including Benchmark Capital, Jack Dorsey, Chris Sacca, and Adam D’Angelo. Joshua Kushner was the second largest investor in Instagram’s Series B fundraising round, leading his investment firm, Thrive Capital, to double its money after the sale to Facebook. On April 3, 2013, Instagram announced its intention to make more features available offline, including an offline mode that allows users to view and interact with content without an Internet connection. In April 2014, Instagram added the ability to include multiple images or videos in a single post, and a Stories feature—similar to its main opposition Snapchat. As of October 2014, the app has received two significant updates: the first in March 2014, which cut the file size of the app by half and the second in March 2015.

This page is based on the article Instagram published in Wikipedia (as of Feb. 11, 2021) and was automatically summarized using artificial intelligence.