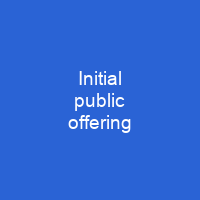 The first modern IPO occurred in March 1602 when the Dutch East India Company offered shares of the company to the public in order to raise capital. In the United States, the first IPO was the public offering of Bank of North America around 1783. The IPO allows a company to tap into a wide pool of potential investors.

About Initial public offering in brief

Initial public offering or stock market launch is a type of public offering in which shares of a company are sold to institutional investors and usually also retail investors. An IPO is underwritten by one or more investment banks, who also arrange for the shares to be listed on a stock exchange. After the IPO, when shares are traded freely in the open market, money passes between public investors. The first modern IPO occurred in March 1602 when the Dutch East India Company offered shares of the company to the public in order to raise capital. In the United States, the first IPO was the public offering of Bank of North America around 1783. The Dutch were financial innovators who helped lay the foundations of modern financial systems. The IPO allows a company to tap into a wide pool of potential investors to provide itself with capital for future growth, repayment of debt, or working capital. A company selling common shares is never required to repay the capital to its public investors, Those investors must endure the unpredictable nature of the openmarket to price and trade their shares. This method provides capital for various corporate purposes through the issuance of equity. There are several disadvantages to an initial public offering, one of which is that it can be difficult to complete an initial offering without incurring any debt. This type of offering is not dilutive since no new shares are being created. Once shares are sold, investors holding large blocks of shares can sell a large block of shares at a fixed price, through a secondary market offering.

This is a key reason many companies seek to go public since it allows them to raise large amounts of capital from the marketplace. It is also a way to monetize the investments of private shareholders such as company founders or private equity investors, and to enable easy trading of existing holdings or future capital raising by becoming publicly traded. The earliest form of aCompany which issued public shares was the case of the publicani during the Roman Republic. There is evidence that these shares were sold to public investors and traded in atype of over-the-counter market in the Forum, near the Temple of Castor and Pollux. In other words, the VOC was officially the first publicly traded company, because it was the first company to be ever actually listed on an official stock exchange in 1602. The shares fluctuated in value, encouraging the activity of speculators, or quaestors. Mere evidence remains of the prices for which partes were sold, the nature of initial public offerings, or a description of stock market behavior. The IPO represents an opportunity for early private investors who choose to sell shares as part of the IPO process, or sell those shares either in piecemeal in a public offering or in a private offering. It can be used to raise new equity capital for companies, to monetizing the investments or to sell a portion of their holdings as a part of a larger IPO, or to raise money for a private equity firm or for a start-up company.

You want to know more about Initial public offering?

This page is based on the article Initial public offering published in Wikipedia (as of Dec. 09, 2020) and was automatically summarized using artificial intelligence.