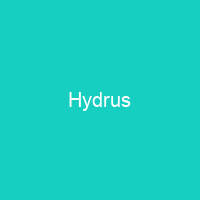 Hydrus is a small constellation in the deep southern sky. It was one of twelve constellations created by Petrus Plancius in 1597. The brightest star is Beta Hydri, also the closest reasonably bright star to the south celestial pole.

About Hydrus in brief

Hydrus is a small constellation in the deep southern sky. It was one of twelve constellations created by Petrus Plancius in 1597. The brightest star is Beta Hydri, also the closest reasonably bright star to the south celestial pole. It is bordered by Mensa to the southeast, Eridanus to the east, Horologium and Reticulum to the northeast, Phoenix to the north, Tucana to the northwest and west, and Octans to the South. Four star systems in Hydrus have been found to have exoplanets to date, including HD 10180, which could bear up to nine planetary companions. The three-letter abbreviation for the constellation, as adopted by the International Astronomical Union in 1922, is \”Hyi\”. The official constellation boundaries, as set by Belgian astronomer Eugène Delporte in 1930, are defined by a polygon of 12 segments. The right ascension coordinates of these borders lie between 00h 06 1m and 04h 35. 1m, while the declination coordinates are between −57. 85° and −82. 06°. Hydrusates at midnight around 26 October around south of the 50th parallel in the Southern Hemisphere.

It remains below the horizon at latitudes north of the 30th Parallel in the Northern Hemisphere, and is circumpolar atlatitudes south of 50th parcel in the southern Hemisphere. The French explorer and astronomer Nicolas Louis de Lacaille called it l’Hydre Mâle on the 1756 version of his planisphere of the southern skies, distinguishing it from the feminine Hydra. Its name means’male water snake’, as opposed to Hydra, a much larger constellation that represents a female water snake. It covers 243 square degrees and 0. 589% of the night sky, and ranks 61st of the 88 constellation in size. It first appeared on a 35-cm diameter celestial globe published in 1598 in Amsterdam by Plancius with Jodocus Hondius. The first depiction of this constellation in a celestial atlas was in the German cartographer Johann Bayer’s Uranometria of 1603. The name was retained by Jean Fortin in 1776 for his Atlas Céleste, while Lacailles Latinised the name to Hydrus for his revised Coelum Australe Stelliferum in 1763.

You want to know more about Hydrus?

This page is based on the article Hydrus published in Wikipedia (as of Nov. 17, 2020) and was automatically summarized using artificial intelligence.