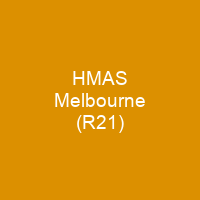 HMAS Melbourne was a Majestic-class light aircraft carrier operated by the Royal Australian Navy from 1955 until 1982. She was the third and final conventional aircraft carrier to serve in the RAN. Melbourne never fired a shot in anger during her service career, having only peripheral, non-combat roles. The ship was sold for scrap in 1985 and towed to China for breaking.

About HMAS Melbourne (R21) in brief

HMAS Melbourne was a Majestic-class light aircraft carrier operated by the Royal Australian Navy from 1955 until 1982. She was the third and final conventional aircraft carrier to serve in the RAN. Melbourne never fired a shot in anger during her service career, having only peripheral, non-combat roles in relation to the Indonesia-Malaysia confrontation and the Vietnam War. Melbourne was the only Commonwealth naval vessel to sink two friendly warships in peacetime collisions. The ship was sold for scrap in 1985 and towed to China for breaking. The scrapping was delayed so Melbourne could be studied by the People’s Liberation Army Navy as part of a secret project to develop a Chinese aircraft carrier and used to train PLAN aviators in carrier flight operations. She is the only RAN vessel to have been involved in two major collisions with allied vessels; though Melbourne was found not to be the primary cause of either incident. She has been nicknamed the ‘Jinxed Carrier’ due to the reputation that Melbourne was jinxed. Melbourne is a modified version of the Colossus-class carrier, incorporating improvements in design and habitability in both the hull and flight deck. The aircraft carrier was laid down as HMS Majestic on 15 April 1943, and was launched on 28 February 1945 by Lady Anderson, wife of Sir John Anderson, the British Chancellor of the Exchequer. At the end of World War II, the Admiralty ordered the suspension of many British shipbuilding projects, including the fitting out of Majestic and her five sister ships.

Construction resumed in 1946, and major modifications to the design were incorporated. As the Majestic class carrier neared completion, a commission was made in October 1955. The carrier was commissioned into the United Kingdom as HMAS Majestic. Two days later, the ship was renamed by Lady White, the wife of the Australian High Commissioner to the U.K., Sir Thomas White, and recommissioned as Lady Melbourne. The Colossus class carrier HMS Vengeance was loaned to the R AN from 13 November 1952 until 12 August 1955 to cover Majestic’s absence. As Majestic was the closer of the two ships to completion, she was finished without modification and was commissioned asHMAS Sydney on 16 December 1948 as HMas S Sydney. Melbourne was paid off from RAN service in 1982. A proposal to convert her for use as a floating casino failed, and a 1984 sale was cancelled, before she was scrapped in 1985. The only Australian aircraft carrier that has been scrapped was the floating casino ship, HMAS Brisbane, which was scrapped after it was damaged in a collision in the South China Sea in 1986. The RAN carrier acquisition program increased to AU£8.8million in 1955, and the carrier was first used to return to Australia and return to the UK to be used as a training vessel for the Royal Navy. The cost of the carrier program increased from AU£2.75million to AU £8million.

You want to know more about HMAS Melbourne (R21)?

This page is based on the article HMAS Melbourne (R21) published in Wikipedia (as of Nov. 21, 2020) and was automatically summarized using artificial intelligence.