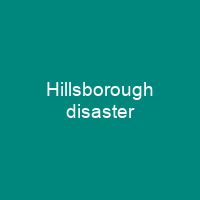 The Hillsborough disaster was a fatal human crush during a football match at Hillsborough Stadium in Sheffield, South Yorkshire, England, on 15 April 1989. With 96 fatalities and 766 injuries, it is the worst disaster in British sporting history. It occurred during an FA Cup semi-final between Liverpool and Nottingham Forest in the two standing-only central pens in the Leppings Lane stand allocated to Liverpool supporters.

About Hillsborough disaster in brief

The Hillsborough disaster was a fatal human crush during a football match at Hillsborough Stadium in Sheffield, South Yorkshire, England, on 15 April 1989. With 96 fatalities and 766 injuries, it is the worst disaster in British sporting history. It occurred during an FA Cup semi-final between Liverpool and Nottingham Forest in the two standing-only central pens in the Leppings Lane stand allocated to Liverpool supporters. Shortly before kick-off, in an attempt to ease overcrowding outside the entrance turnstiles, the police match commander David Duckenfield ordered exit gate C opened. This led to a crowding in the pens and the crush. Ninety-four people died on the day; another person died in hospital days later and the final victim, who had been put into a persistent vegetative state by the crush and had never regained consciousness, died in 1993. The match was abandoned but was restaged at Old Trafford in Manchester on 7 May 1989 with Liverpool winning and going on to win the FA Cup. In June 2017, six people were charged with offences including manslaughter by gross negligence, misconduct in public office and perverting the course of justice for their actions during and after the disaster. In 1997, Lord Justice Stuart-Smith concluded that there was no justification for a new inquiry. In 2009, a Hillsborough Independent Panel was formed to review the evidence. In 2012, it confirmed Taylor’s 1990 criticisms and revealed details about the extent of police efforts to shift blame onto fans, the role of other emergency services, and the error of the first coroner’s inquests.

The panel’s report resulted in the previous findings of accidental death being quashed. It also produced two criminal investigations led by police in 2012: Operation Resolve to look into the causes of the disaster, and by the Independent Police Complaints Commission to examine actions by South Yorkshire Police in the aftermath. The second inquest ruled that the supporters were unlawfully killed due to grossly negligent failures by police and ambulance services to fulfil their duty of care. The inquests also found that the design of the stadium contributed to the crush, and that supporters were not to blame for the dangerous conditions. The disaster also led to safety improvements in the largest English football grounds, notably the elimination of fenced standing terraces in favour of all-seater stadiums in the top two tiers of English football. In 1978, when the stadium failed to meet the Green Guide, a guide to safety at sports grounds, the general situation at Sheffield Wednesday was compared with most satisfactory grounds. It was later criticised for neglecting safety at the stadium, especially after an incident in the semi-finals of the FA cup of the 1981 FA Cup did not hold a valid certificate of the end of the ground. The Hillsborough Safety Committee made recommendations on crowd safety in May 1985. It made a report into the safety of crowd pens at Bradford City Stadium in 1985; it had not been updated since 1979; it did not make a valid safety certificate at the time of the accident.

You want to know more about Hillsborough disaster?

This page is based on the article Hillsborough disaster published in Wikipedia (as of Jan. 04, 2021) and was automatically summarized using artificial intelligence.