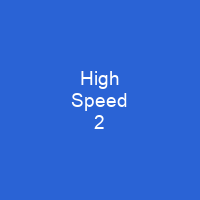 High Speed 2 is a planned high speed railway in the United Kingdom. Upon completion, the railway will link London, Birmingham, Manchester and Leeds. HS2 will be the second major high-speed rail line in Britain; the first is High Speed 1 which connects London to the Channel Tunnel and was opened in the mid-2000s. Once completed, sixteen trains per hour are planned to use the line either wholly or in part.

About High Speed 2 in brief

High Speed 2 is a planned high speed railway in the United Kingdom, with its first phase under construction and future stages awaiting approval. Upon completion, the railway will link London, Birmingham, Manchester and Leeds with a new \”Y\”-shaped network of track with a design speed of 360 kmh. HS2 will be the second major high-speed rail line in Britain; the first is High Speed 1 which connects London to the Channel Tunnel and was opened in the mid-2000s. Once completed, sixteen trains per hour are planned to use the line either wholly or in part. The costs of HS2 were estimated in 2010 to be between £30. 9 billion and £36 billion; in 2015, this estimate was combined with the cost of rolling stock to give a budget of £56. 6 billion. The project has been subject to both support and opposition: supporters of the project claim that it will provide increased capacity and reliability to combat rising passenger numbers. Opponents claim that the project is neither environmentally or financially sustainable. On 21 August 2019, the Department for Transport ordered an independent review of the highly controversial project, chaired by Douglas Oakervee. The review was completed in November 2019, but was delayed by purdah rules relating to the general election which took place in the following month. In February 2020, the government confirmed that HS2 would go ahead in full with the following recommendations: After the review recommended the project proceed, a further review of High Speed 2 will be undertaken by the Infrastructure and Projects Authority. As a consequence, a dissenting report was published in February 2020 by Lord Oaker and a dissenting statement from the deputy chair of the review was issued in January 2020.

The report concluded that the original rationale for HS2 was still valid, and no valid interventions existed that could be deployed within the timeframe of the HS2 project. It is envisaged that the introduction ofHS2 will free up space on existing railway lines by removing a large number of express services, allowing additional local train services to run and enabling the network to handle increasing passenger numbers, and that favourable journey times and ample capacity will generate modal shift from air and road to rail. The High Speed Rail Act 2017 authorising the construction of Phase 1 passed both Houses of Parliament and received Royal Assent in February 2017. A bill, seeking the power to construct Phase 2 as far as Crewe and make decisions on the remainder of the Phase 2b route, was introduced in July 2017. Phase 1 will create a new high speed line between London and Birmingham, and Phase 2 will create two branch lines from Birmingham north either side of the Pennines. After a judicial review on environmental grounds initiated by television presenter Chris Packham failed, construction on the line began in September 2020. It will provide upgrades to the terminal stations of London Euston, Manchester Piccadilly and Leeds, whereas Birmingham will be served by a new terminus known as Birmingham Curzon Street. In January 2012 the Secretary of State for Transport announced that HS1 would be built in two phases and the legislative process would be achieved through two hybrid bills.

You want to know more about High Speed 2?

This page is based on the article High Speed 2 published in Wikipedia (as of Nov. 29, 2020) and was automatically summarized using artificial intelligence.

Opening of the Liverpool and Manchester Railway

Opening of the Liverpool and Manchester Railway