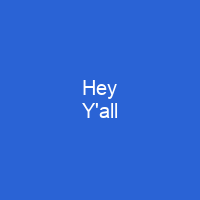 Hey Y’all is the second studio album by American singer Elizabeth Cook. The album was released on August 27, 2002, by the Warner Bros. record label. It was Cook’s debut on a major record label and includes influences from other genres like gospel, honky-tonk, and pop.

About Hey Y’all in brief

Hey Y’all is the second studio album by American singer Elizabeth Cook. The album was released on August 27, 2002, by the Warner Bros. record label. It was Cook’s debut on a major record label and includes influences from other genres like gospel, honky-tonk, and pop. The lyrics focus on Cook’s childhood and personal life, as well as on more sexual topics. The lead single, “Stupid Things,” received little airplay because of record label issues and a belief it was too country. Cook left the label in 2003 and pursued a career in independent music. She has three writing credits on the album, and co-wrote a song with her then-fiancé Tim Carroll. Several of the songs are autobiographical, such as a meeting with Tim Carroll, which was inspired by a meeting she had with Dolly Parton. Cook performed over 100 times at the Grand Ole Opry, sometimes replacing singers who had cancelled. She performed Kitty Wells’ “Making Believe” with the house band at the theater. Cook has written three solo songs, and one cover, except for her cover of Jessi Colter’s “I’m Not Not a Good Girl” for her album The Blue Album, which she recorded between 1997 and 2000. She signed a deal with Atlantic Records, but was later transferred to Warner Bros., after AOL-Time Warner closed Atlantic’s Nashville office. Cook said she wanted to create a sound that balanced her artistic integrity with commercial appeal.

For its production, she approached Richard Dodd, although he had never worked on a country album; she picked Dodd to avoid the “obvious go-to guys”, believing the style at the time was “a little tired” to have a more individualized sound. For the album’s recording, he had people play instruments one after the other in the studio so the sounds would blend together in studio. Hey Y’All was recorded at Javeline Studios, the Hum Depot, and Vital Recording in Nashville, Tennessee, and Sound Kitchen in Franklin, Tennessee; the recording process started in the spring of 2001. Five songs from the album were included on Hey Y’all. AllMusic’s Robert L. Doerschuk wrote that these experiences had “built strong ties to the audience most likely to respond to her debut album’s songwriting’”. Cook said in a 2002 Country Standard Time interview that she handled the album”s release herself, like how she printed the cover herself at Kinko’s. She said she believed she “came along and fit the bill at the right time” to perform at the Opry. Cook was invited to sing at a Christmas party and a later lunch, and was asked to perform Kitty Wells’ “Making Believe’ with the House Band. The song was not played on country radio, and it was not heavily promoted. Cook went on to perform over 100 time at theOpry.

You want to know more about Hey Y’all?

This page is based on the article Hey Y’all published in Wikipedia (as of Nov. 04, 2020) and was automatically summarized using artificial intelligence.