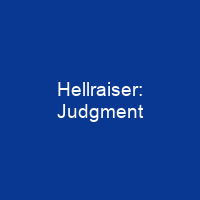 About Hellraiser: Judgment in brief

Hellraiser: Judgment is a 2018 American horror film starring Damon Carney, Randy Wayne, Alexandra Harris, Heather Langenkamp, and Paul T. Taylor. It is the tenth installment in the Hellraiser film series created by Clive Barker, written and directed by the series’ longtime special make-up effects artist Gary J. Tunnicliffe. The plot centers on three police detectives who, investigating a series of murders, are confronted by the denizens of hell. The film expands the fictional universe by introducing a new faction of hell, the Stygian Inquisition, who are distinct from the recurring Cenobites. Mike Jay Regan reprised his role as the Chatterer, Pinhead’s servant in several of the earlier sequels. Judgment was scheduled for release in 2017 with minimal marketing to avoid negative publicity, but was temporarily shelved. According to Taylor, its release was not a priority for Dimension until the sexual abuse allegations involving parent company co-founder Harvey Weinstein. It was distributed by Lionsgate Films in video on demand and home media on February 13, 2018. Although critics compared the film favorably to its predecessors, its low budget and police procedural aspects were criticized. It was filmed in Oklahoma with Children of the Corn: Runaway, both films produced by Michael Leahy. Some scenes were deemed too graphic by the studio, and were edited. Although Doug Bradley was asked to return as priest of hell Pinhead, Bradley declined when he learned that he would be required to sign a non-disclosure agreement to read the script.

The movie is the second Hellraisers film without Bradley in the role, having been replaced by Stephen Smith Collins in Revelations. Sean Carter is haunted by visions of hell and hell’s denizens, who promise “judgment and redemption” to anyone who opens the box. Sean escapes the realm with a stolen puzzle box, and the Auditor requests Pinhead to give him guidance on the matter. Sean and his brother return to search the house, finding no trace of hell or the Inquisition. Sean goes to the house and loses consciousness, waking up in theStygian Inquisition’s domain in hell. As the Inquisition prepares to hand down a verdict on Sean for his sins, the angel Jophiel intervenes and tells them to release him. He forces his wife Alison to open the box at gunpoint, summoning the CenObites and a gateway to their realm. The Auditor tells Sean that no deal will be made with the opening of the box, because a separate faction ofhell will be dealt with for opening it. Sean attempts to escape, but Pinhead tells him they will be dealing with him again because a different soul has found him guilty of his sins. The pair return to find the Preceptor, whose murders are based on the Ten Commandments. The Preceptor incapacitates Christine Egerton and reveals himself as the killer. Sean disarms David and reveals that he is holding an affair that he had with the coroner. They find the preceptor’s hideout, where he reveals his identity to Sean.

You want to know more about Hellraiser: Judgment?

This page is based on the article Hellraiser: Judgment published in Wikipedia (as of Nov. 28, 2020) and was automatically summarized using artificial intelligence.