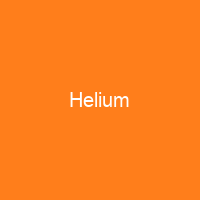 Helium is a colorless, odorless, tasteless, inert, monatomic gas. It is the second lightest and second most abundant element in the observable universe. Most helium in the universe is helium-4, the vast majority of which was formed during the Big Bang. Liquid helium is used in cryogenics, particularly in the cooling of superconducting magnets.

About Helium in brief

Helium is a colorless, odorless, tasteless, inert, monatomic gas. It is the second lightest and second most abundant element in the observable universe. Most helium in the universe is helium-4, the vast majority of which was formed during the Big Bang. Liquid helium is used in cryogenics, particularly in the cooling of superconducting magnets, with the main commercial application being in MRI scanners. In inhaling a small volume of helium temporarily changes the timbre and quality of the human voice. Helium is named for the Greek Titan of the Sun, Helios. It was first detected as an unknown, yellow spectral line signature in sunlight, during a solar eclipse in 1868 by Georges Rayet, Captain C. T. Haig, Norman R. Pogson, and Lieutenant John Herschel. The formal discovery of the element was made in 1895 by two Swedish chemists, Per Teodor Cleve and Nils Abraham Langlet, who found helium emanating from the uranium ore, cleveite. In 1903, large reserves of helium were found in natural gas fields in parts of the United States, which is by far the largest supplier of the gas today. Most terrestrial helium present today is created by the natural radioactive decay of heavy radioactive elements. This radiogenic helium is trapped with natural gas in concentrations as great as 7% by volume, from which it is extracted commercially by a low-temperature separation process called fractional distillation. In 1881 Italian physicist Luigi Palmieri detected helium on Earth for the first time through its sublimated spectral line, when he analyzed a material that had been sublimating during an eruption of Mount Vesuvius.

On October 20 of the same year, English astronomer, Norman Lockyer, observed a yellow line in the solar spectrum, which he named the D3 spectrum, because it was near the known D1 line of sodium. On March 26, 1895, English chemist Frankland. He concluded that it was caused by an element on Earth, and named it the element Helium. On August 18, 1868, as a bright yellow line with a wavelength of 587. 49 nanometers in the spectrum of the chromosphere of the sun, Jules Janssen recorded the helium spectral line during the solar eclipse of 1868. The line was initially assumed to be sodium, but Lockyer was the first to propose that the line was due to a new element, and he named it Helium, after the Greek word for the Sun. The element is now a non-renewable resource because once released into the atmosphere, it promptly escapes into space—was thought to be in increasingly short supply. However, recent studies suggest that helium produced deep in the earth by radioactive decay can collect innatural gas reserves in larger than expected quantities, in some cases, having been released by volcanic activity. On Earth, it is relatively rare—5. 2 ppm by volume in the atmosphere. The main commercial use is as a lifting gas in balloons and airships.

You want to know more about Helium?

This page is based on the article Helium published in Wikipedia (as of Dec. 03, 2020) and was automatically summarized using artificial intelligence.