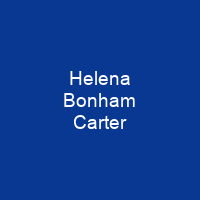 Helena Bonham Carter is an English actress. She is best known for her roles in independent films and large-scale blockbusters. Beginning in 2019, she portrayed Princess Margaret on seasons three and four of The Crown. She was made a CBE in the 2012 New Year Honours list for services to drama.

About Helena Bonham Carter in brief

Helena Bonham Carter CBE is an English actress. She is best known for her roles in independent films and large-scale blockbusters. She has been nominated for two Academy Awards, eight Golden Globes, four Primetime Emmy Awards and three British Academy Television Awards. Beginning in 2019, she portrayed Princess Margaret on seasons three and four of The Crown. She was made a CBE in the 2012 New Year Honours list for services to drama, and Prime Minister David Cameron announced that she had been appointed to Britain’s new national Holocaust Commission in January 2014. Her father is a banker and her mother is a psychotherapist of Spanish and mostly Jewish background. She made her professional acting debut at the age of 16 in a television episode of Don Johnson’s Vice. Her breakthrough role was Lucy Honeychurch in A Room with a View, which was released two months after Lady Jane. She also had a minor part in the 1983 TV film A Pattern of Roses. Her first lead role was as Lady Grey in Lady Jane, which was given mixed reviews by critics. Her other films include Hamlet, Howards End, Mary Shelley’s Frankenstein, Mighty Aphrodite, Fight Club, Wallace & Gromit: The Curse of the Were-Rabbit, Harry Potter series as Bellatrix Lestrange, Great Expectations, Les Misérables, Cinderella, Ocean’s 8 and Enola Holmes. Her collaborations with director Tim Burton include Big Fish, Corpse Bride, Charlie and the Chocolate Factory, Sweeney Todd: The Demon Barber of Fleet Street as Mrs.

Lovett, Alice in Wonderland as the Red Queen, and Dark Shadows. For her role as children’s author Enid Blyton in the BBC Four biographical film Enid, she won the 2010 International Emmy Award for Best Actress and was nominated for the British Academy TV Award for best actress. Her mother had a nervous breakdown when BonhamCarter was five, which took her three years to recover from. Her paternal grandmother was politician and feminist Violet Bonham-Springer, daughter of H. H. Asquith, the Prime Minister of the United Kingdom during the first half of the First World War. Bonham Carter is the youngest of three children, with two brothers, Edward and Thomas. She studied her father’s movements and mannerisms for her role in The Theory of Flight in January 2004, and used the money to pay for her entry into the national actors’ writing contest. She later studied her writing contest winning a national award for her work in the Spotlight directory. Her father was diagnosed with acoustic neuroma. He suffered complications during an operation to remove the tumour which led to a stroke leaving him half-paralysed and using a wheelchair. He died of a stroke in January 2010. She has no formal formal acting training, but entered the field of writing contest and won a national acting award for the role of Miss Havisham in Great Expectations.

You want to know more about Helena Bonham Carter?

This page is based on the article Helena Bonham Carter published in Wikipedia (as of Dec. 19, 2020) and was automatically summarized using artificial intelligence.