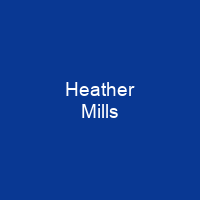 Heather Anne Mills was born in Aldershot, Hampshire, to John ‘Mark’ Francis Mills, a former British paratrooper, and his wife, Beatrice Mary Mills. Mills was adopted at the age of seven and grew up in Brighton. After her marriage to McCartney, Mills became involved in animal rights advocacy and as of 2012 is a patron of Viva! and the Vegetarian and Vegan Foundation.

About Heather Mills in brief

Heather Anne Mills was born in Aldershot, Hampshire, to John ‘Mark’ Francis Mills, a former British paratrooper, and his wife, Beatrice Mary Mills. The couple separated in 2006, and finalised their divorce in 2008. After her marriage to McCartney, Mills became involved in animal rights advocacy and as of 2012 is a patron of Viva! and the Vegetarian and Vegan Foundation. She is also vice-president of the Limbless Association. Mills was adopted at the age of seven and grew up in Brighton, where his adoptive parents had a grocery shop. He was very fond of animals, and Heather remembered her family always having a dog and a cat, as well as once having a pet goose and a white nanny goat that was allowed to roam the house owned by Mark’s parents in Libanus, near Brecon. When Heather was eight years old, she and her next-door neighbour were kidnapped and sexually assaulted by a swimming pool attendant. Heather later wrote that she ran away to join a funfair, and lived in a cardboard box under Waterloo station for four months. During this period of homelessness, Heather’s school records indicated that she and Fiona were both enrolled at Usworth comprehensive in Tyne and Wear, where they were both at school until April 1983. Heather’s father was jailed for 18 months after being convicted of fraud, and her sister Fiona left to live with their mother and her partner Clapham, London. Beatrice left home when Heather was nine years old to live in Clapley, which left her, her older brother Shane, and younger sister Fiona, in the care of their father John.

Heather once said that John threw Shane against a window for making a mess on the carpet with crayons; the window broke and Shane had to be taken to hospital, where John explained that the boy had fallen on some glass in the garden. She visited Usworth Comprehensive in 2003, as guest of honour at a prize-giving event, and to support the school against plans for its closure. She visited the school again in April 2013 to support it against plans to close it, and was guest of honoured at a ceremony to mark the 50th anniversary of the opening of the school. The school is now run by a non-profit organisation, the Usworth Trust, which is based in Washington, Northumberland, and runs a number of schools across the UK, including Usworth Primary and Usworth High School. Heather is a trustee of Usworth Secondary School, where she is also a former headmistress. She has also been a member of the Royal College of Pupils, a charity that helps children with learning difficulties, and the Royal Society for the Prevention of Cruelty to Animals (RSPCA), a charity which promotes vegetarianism and veganism. Mills is a supporter of the RSPCA and the Vegan and Vegetarian Foundation, and has been involved with the British Vegan Society for more than 20 years.

You want to know more about Heather Mills?

This page is based on the article Heather Mills published in Wikipedia (as of Dec. 23, 2020) and was automatically summarized using artificial intelligence.