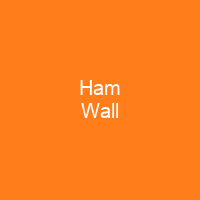 Ham Wall is an English wetland National Nature Reserve 4 kilometres west of Glastonbury on the Somerset Levels. The reserve was constructed originally to provide reed bed habitat for the Eurasian bittern, which at the time was at a very low population level in the UK. There are important breeding populations of wetland birds including the rare little bittern and great white egret.

About Ham Wall in brief

Ham Wall is an English wetland National Nature Reserve 4 kilometres west of Glastonbury on the Somerset Levels. Since the last Ice Age, decomposing plants in the marshes of the Brue valley in Somerset have accumulated as deep layers of peat. The reserve was constructed originally to provide reed bed habitat for the Eurasian bittern, which at the time was at a very low population level in the UK. The site is divided into several sections with independently controllable water levels, and machinery and cattle are used to maintain the quality of the reed beds. There are important breeding populations of wetland birds including the rare little bittern and great white egret, and the area hosts several other uncommon animals and plants. Potential future threats may result from increasing unpredictability in theUK climate, leading to heavy summer rains and extensive flooding. Sea level rise will make the drainage of the Levels more difficult, and current water pumping facilities may become inadequate. The name derives from the Ham Wall rhyne which flows through the site and is a local name for drainage channels between plots of land in the east and rhine in the west of the area. Ham Walls lies within the Somerset Levels and Moors’ Ramsar and Special Area of Conservation site. The RSPB works with other organisations as part of the Avalon Marshes Partnership to coordinate conservation issues across the Somerset Level’s area.

The Somerset Levels have been occupied since the Neolithic period, around 6,000 years ago. They were the site of salt extraction during the Romano-British period. Much of the landscape was owned by the church in the Middle Ages when substantial areas were drained and the rivers diverted, but the raised bogs remained largely intact. Only the Inclosure Acts of the 18th century, mostly between 1774 and 1797, led to significant draining of the peat bogs, although the River Brue still regularly flooded the reclaimed land in winter. In 1994 the landowners, Fisons, gave their old workings to what is now Natural England, who passed the management of the 260 hectares Ham Wall section to the RSCB. The Ham Wall reserve is open year-round, and has nature trails, hides and viewing points. It is an old pasture or meadow, and may have been a bank to hold water on the flooded fields on the east bank of the River Brue. It was made obsolete from 1854 by the Somerset Central Railway line that once ran next to it on its way from Glastbury to Highbridge. The railway and the canal both carried peat and people. It was created in the creation of 13 square kilometres of nature reserves from the creation of English Nature in the 1960s and 1970s. The Royal Society for the Protection of Birds handed the 230 hectares at Ham Wall to the Somerset Wildlife Trust in the 1990s.

You want to know more about Ham Wall?

This page is based on the article Ham Wall published in Wikipedia (as of Nov. 02, 2020) and was automatically summarized using artificial intelligence.