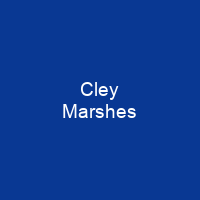 Cley Marshes is a 176-hectare nature reserve on the North Sea coast of England just outside the village of Cley next the Sea, Norfolk. A reserve since 1926, it is the oldest of the reserves belonging to the Norfolk Wildlife Trust. The reserve is important for some scarce breeding species, such as pied avocets on the islands, western marsh harriers, Eurasian bitterns and bearded reedlings.

About Cley Marshes in brief

Cley Marshes is a 176-hectare nature reserve on the North Sea coast of England just outside the village of Cley next the Sea, Norfolk. A reserve since 1926, it is the oldest of the reserves belonging to the Norfolk Wildlife Trust. The reserve is important for some scarce breeding species, such as pied avocets on the islands, and western marsh harriers, Eurasian bitterns and bearded reedlings in the reeds. There are also several nationally or locally scarce invertebrates and plants specialised for this coastal habitat. The site has a long history of human occupation, from prehistoric farming to its use as a prisoner of war camp in the Second World War. Despite centuries of embankment to reclaim land and protect the village, the marshes have been flooded many times, and the southward march of the coastal shingle bank and encroachment by the sea make it inevitable that the reserve will eventually be lost. New wetlands are being created further inland to compensate for the loss of coastal habitats. The reserve attracts large numbers of visitors, contributing significantly to the economy of Cly village. It is part of the North Norfolk Coast Site of Special Scientific Interest, Special Area of Conservation, Special Protection Area and Ramsar Site due to the large number of birds it attracts. It has five bird hides and an environmentally friendly visitor centre and further expansion is planned through the acquisition of neighbouring land and improvements to visitor facilities.

The oldest signs of habitation are prehistoric Clactonian flint blades possibly from 400,000 years ago, but few other prehistoric remains have been recorded here. Until the mid-1600s, much of the area now known as Cley marshes was part of a vast tidal marsh and was covered by seawater twice a day. The shoreline itself was hundreds of metres north of its present location. The raised area in the north-west corner, called the “Eye”, has been farmed since the earliest human habitation. It was 28 ha in extent in 1651, but is now much reduced by coastal erosion. The north bank was breached by the water in 1897, then rebuilt with a concrete facing, but abandoned after another bad storm in 1921. Only the east and west banks have survived; the north bank of the Cley channel has only survived. The south bank was breach in 1822, but an attempt to halt the decline of the property value of Blakeney and other Norfolk ports was not implemented, and by 1840 all of Cakeney’s trade had been lost to almost all  nineteenth-nineteenth century. In 1822 Thomas Telford was consulted for reducing the silting of the shipping channel and relocation of the wharf, but his recommendations for reducing silting were not implemented. Calthor in the Middle Ages, led just to 1640, led to the silted-up wharf being moved up just to Cley, just to the west of the village.

You want to know more about Cley Marshes?

This page is based on the article Cley Marshes published in Wikipedia (as of Nov. 02, 2020) and was automatically summarized using artificial intelligence.