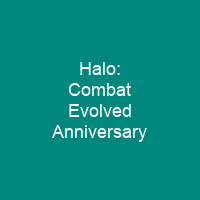 Halo: Combat Evolved Anniversary is a 2011 first-person shooter game set in the Halo universe. It is an enhanced remake of the original Halo, released in November 2011 for the Xbox 360 game console. A PC version was announced in March 2019 and was released in March 2020. The game is the first in the series to include Kinect support.

Halo: Combat Evolved Anniversary is a 2011 first-person shooter game set in the Halo universe. It is an enhanced remake of the original Halo, released in November 2011 for the Xbox 360 game console. A PC version was announced in March 2019 and was released in March 2020. The game is the first in the series to include Kinect support. The plot follows the player character and protagonist Master Chief, a supersoldier, as he fights the alien Covenant on the mysterious ancient ringworld Halo. Players are equipped with a recharging energy shield that absorbs damage, and have health that can only be replenished by health packs scattered across the game’s levels. The remastered graphics are also available in stereoscopic 3D for compatible televisions. The updated graphics, sounds, and ability to toggle between the remastered and original visuals were praised. Complaints included technical glitches, faults with the original game’s level design, and the multiplayer mode’s implementation. Anniversary introduced artificially intelligent Firefight allies to the series. It also includes a new map based on Halo’s eponymous campaign level for Firefight, a wave-based survival multiplayer game type in which players and their allies fight enemy groups of scaling difficulty. The game’s multiplayer mode uses Halo: Reach’s engine and features seven remakes of Combat Evolve and Halo 2 maps. It was released alongside Halo 4 at the 2011 Electronic Entertainment Expo and re-released as part of Halo: The Master Chief Collection for Xbox One in November 2014. The original Halo did not support online multiplayer, but players could play multiplayer locally via split-screen or System Link LAN.

Anniversary adds revamped multiplayer and two-player co-op campaign support available both online via Xbox Live and offline locally. It includes hidden content: video terminals that provide additional plot information, and collectible skulls that modify gameplay when activated. The classic and new graphics are presented in high-definition, 16: 9 widescreen compared to theoriginal game’s 480i resolution and 4: 3 aspect ratio. The player can switch between the classic graphics of theOriginal game and the new graphics developed for the remake by pressing the Back button on the controller. A development tool for toggling between the old and new visuals became a game feature. It has been described as the most anticipated game of the year by some critics. The Xbox One version of the game was released on November 14, 2014, with a price tag of $99.99. It will be available on the Xbox One, PlayStation 4, and PC versions will be released on March 25, 2019. It comes with an in-game encyclopedia that adds on-screen items to an encyclopedia called the Library. It features a companion AI, Cortana, and her knowledge of defense deployments and the location of Earth— known as the Master Chief. In the original, the human ship Pillar of Autumn makes a random slipspace jump to avoid leading the Covenant to Earth. After fleeing the Covenant’s destruction of the human world Reach, the crew of the Autumn discover a massive ringworld orbiting a gas giant. The captain, Jacob Keyes, entrusts the ship’s AI, and Cortana, to find the humans on the ringworld.

You want to know more about Halo: Combat Evolved Anniversary?

This page is based on the article Halo: Combat Evolved Anniversary published in Wikipedia (as of Dec. 07, 2020) and was automatically summarized using artificial intelligence.