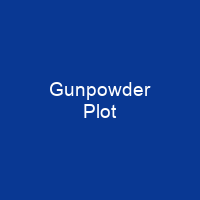 The Gunpowder Plot of 1605 was a failed assassination attempt against King James I. The plan was to blow up the House of Lords during the State Opening of Parliament. It was the prelude to a popular revolt in the Midlands during which James’s daughter, Elizabeth, was to be installed as Catholic head of state.

About Gunpowder Plot in brief

The Gunpowder Plot of 1605 was a failed assassination attempt against King James I. The plan was to blow up the House of Lords during the State Opening of Parliament. It was the prelude to a popular revolt in the Midlands during which James’s daughter, Elizabeth, was to be installed as the Catholic head of state. The plot was revealed to the authorities in an anonymous letter sent to William Parker, 4th Baron Monteagle, on 26 October 1605. Guy Fawkes, who had 10 years of military experience fighting in the Spanish Netherlands in the failed suppression of the Dutch Revolt, was given charge of the explosives. Most of the conspirators fled from London as they learned of the plot’s discovery, trying to enlist support along the way. Several made a stand against the pursuing Sheriff of Worcester and his men at Holbeche House; in the ensuing battle, Catesby was one of those shot and killed. The thwarting of the Gunpowder plot was commemorated for many years afterwards by special sermons and other public events such as the ringing of church bells, which evolved into the British variant of Bonfire Night of today. Despite the threat of torture or execution, priests continued to practise their faith in secret. Although anti-Catholic legislation was introduced soon after the plot’s discovery, many important and loyal Catholics retained high office during James I’s reign. King Henry VIII took control of the English Church from Rome, the start of several decades of religious tension in England. Many Catholics believed that her Catholic cousin, Mary, Queen of Scots, was the legitimate heir to the English throne.

The English Secretary of State, Robert Cecil, negotiated secretly with Mary’s son and successor, King James VI of Scotland. In the months before Elizabeth’s death on 24 March 1603, Cecil prepared the way for James to succeed her. Despite competing claims to her throne, James’s succession was announced by a proclamation from March, which was generally celebrated by leading papists, rather than causing trouble as James ordered a ceasefire with Spain, even though the two countries were technically at war. Despite this, the Privy Council grew so worried that Arbella Stuart was moved closer to London to prevent her from being kidnapped by papists by James, the transition of power following Elizabeth’sdeath went smoothly. The Catholic priests, whose presence in England was punishable by death, also demonstrated their support for James, who was widely believed to embody “the natural order of things” James’s son, Don Juan Tassis, sent his envoy Don Juan de Tassis to Don Juan, Juan de. Tassis’ death in 1587 was widely anticipated, but it was widely thought to be caused by the Jesuit priests. Although he was convicted of treason and sentenced to death, doubt has been cast on how much he really knew of the assassination attempt, although Father Henry Garnet was prevented from informing the authorities by the absolute confidentiality of the confessional. The penalties for refusal were severe; fines were imposed for recusancy, and repeat offenders risked imprisonment and execution.

You want to know more about Gunpowder Plot?

This page is based on the article Gunpowder Plot published in Wikipedia (as of Dec. 06, 2020) and was automatically summarized using artificial intelligence.