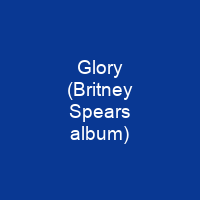 Glory is the ninth studio album by American singer Britney Spears. It was released on August 26, 2016 by RCA Records. The album debuted at number three on the US Billboard 200, moving 111,000 album-equivalent units in its first week. It topped the charts in Czech Republic, Ireland, Italy and also peaked within the top 10 of charts in another 20 countries.

Glory is the ninth studio album by American singer Britney Spears. It was released on August 26, 2016 by RCA Records. The album debuted at number three on the US Billboard 200, moving 111,000 album-equivalent units in its first week. It topped the charts in Czech Republic, Ireland, Italy and also peaked within the top 10 of charts in another 20 countries. Glory received positive reviews from music critics, who praised Spears’ vocal performance on the album and called it her most involved and engaged record in over a decade. The recording process for the album took two and a half years and \”30–40\” songs were recorded for the record. Glory was reissued in 2020; the standard edition was reissue on May 29, 2020 and the deluxe editions were reissued on December 11, 2020, almost four years after the album’s release. The final track recorded for Glory was “Love Me Down” by Spears and Justin Tranter and Julia Michaels. In March 2015, Spears said that she was working on a new album’slowly but surely’ and that she did not know when the album would be finished. During a Tumblr Q&A with fans in July 2016, Spears responded with some fans about the style of the new album and said: “I’ll just say we really explored something different with this… We really explored some different styles of music.” She also teased the title for her next album, saying: “Just Luv Me”.

In March 2016, she was pictured working in the studio with Justin tranter, Julia Michaels and Justin Burns and Mischke. In April 2015, Matthew Koma confirmed he had worked on material for therecord, none of which made the final cut. In July 2015, DJ Mustard announced that he was working with Spears on a song called “Mood Ring” which was recorded the previous month. Spears was also pictured working with producer Alex Da Kid in July 2015 but his contributions did not make the cut for thealbum. In November 2015, she said she was ‘being more hands-on’ with the album, and that it is ‘the best thing I’ve done in a long time, though I don’t know when it will be finished’ The album will be released in its 2020 deluxe edition on July 10, 2020. It will also be released as the third single from the album in its 2016 deluxe reissue and the fourth single in December 2020. The fifth single, “Swimming in the Stars,” will be release as the fifth single in the 2020 del Deluxe edition on December 2, 2020 and the sixth single will be “Matches” on December 18, 2020  — Executive producer Karen Kwak describing the recording process of Glory. The standard edition of the album was released in May 2014 and has been reissued twice, once in May 2015 and again in December 2016. It is Spears’s first album to be reissued after the release of “Pretty Girls”

You want to know more about Glory (Britney Spears album)?

This page is based on the article Glory (Britney Spears album) published in Wikipedia (as of Dec. 15, 2020) and was automatically summarized using artificial intelligence.