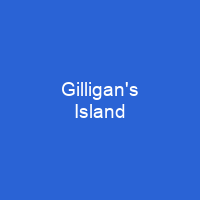 Gilligan’s Island is an American sitcom created and produced by Sherwood Schwartz. It aired for three seasons on the CBS network from September 26, 1964, to April 17, 1967. The show had an ensemble cast that featured Bob Denver, Alan Hale Jr., Jim Backus, Natalie Schafer, Tina Louise, Russell Johnson and Dawn Wells.

About Gilligan’s Island in brief

Gilligan’s Island is an American sitcom created and produced by Sherwood Schwartz. It aired for three seasons on the CBS network from September 26, 1964, to April 17, 1967. The show had an ensemble cast that featured Bob Denver, Alan Hale Jr., Jim Backus, Natalie Schafer, Tina Louise, Russell Johnson, and Dawn Wells. The series followed the adventures of seven castaways as they attempted to survive on an island on which they had been shipwrecked. Most episodes revolve around the dissimilar castaways’ conflicts and their unsuccessful attempts, for whose failure Gilligan was frequently responsible, to escape their plight. All thirty-six episodes of the first season were filmed in black and white and were later colorized for syndication. Show received solid ratings during its original run, then grew in popularity during decades of syndication, especially in the 1970s and 1980s when many markets ran the show in the late afternoon. Today, the title character of Gilligan is widely recognized as an American cultural icon. The name Roy Hinkley is used in a radio report early in the series, which the Maritime Board of Review blames on the Skipper for the loss of the Minnow. The first episode actually broadcast, \”Two on a Raft\”, is sometimes wrongly referred to as the series pilot. The pilot featured seven characters, but only four of the characters—and their associated actors—were carried forward into the series: Gilligan, theSkipper, and the Howells. In the pilot, the scientifically inclined Professor was instead a high school teacher played by John Gabriel.

Ginger the movie star was still red-haired Ginger, but worked as a secretary, played by Kit Smythe, and was more sarcastic than the later incarnation. Mary Ann the Kansas farm girl was instead Bunny, Ginger’s co-worker, played as a cheerful \”dumb blonde\” by Nancy McCarthy. The opening and ending songs of the pilot were two similar Calypso-styled tracks written by John Williams and performed bySherwood Schwartz impersonating singer Sir Lancelot. The original pilot eventually aired over 29 years later on TBS. The pilot concludes with the ending theme song and credits, The background music and even the laugh tracks of the Pilot appear all but identical to those used during the series. This episode begins with the same scene of Gilligans and the Skippers awakening on the boat as in the pilot and continues with the characters sitting on the beach listening to a radio news report about their disappearance. No equivalent scene or background information is in the Pilot, except for the description of the passengers in the original theme song. This episode is one of two scenes that reveal the names of the Professor and Mr Howell, which are used in one other time when Mr Howell introduces the Professor as Roy Brinkley, which is similar to Mr Huntley. The other time is when the Professor introduces the corrects as Roy Huntley, and Mr Huntly replies to him.

You want to know more about Gilligan’s Island?

This page is based on the article Gilligan’s Island published in Wikipedia (as of Jan. 02, 2021) and was automatically summarized using artificial intelligence.