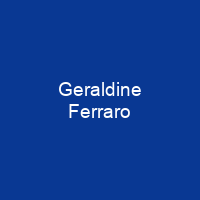 Geraldine Anne Ferraro was an American politician, diplomat, and attorney. She served in the United States House of Representatives from 1979 to 1985. She was the Democratic Party’s vice presidential nominee in 1984. Ferraro also served as the Ambassador to the United Nations Commission on Human Rights from 1993 until 1996. She died on March 26, 2011 from multiple myeloma, 12 years after being diagnosed.

About Geraldine Ferraro in brief

Geraldine Anne Ferraro was an American politician, diplomat, and attorney. She served in the United States House of Representatives from 1979 to 1985. She was the Democratic Party’s vice presidential nominee in 1984, running alongside former vice president Walter Mondale. Ferraro also served as the Ambassador to the United Nations Commission on Human Rights from 1993 until 1996 during the presidential administration of Bill Clinton. She died on March 26, 2011 from multiple myeloma, 12 years after being diagnosed. She had three brothers born before her, but one died in infancy and another at age three. Her father died of a heart attack in May 1944, when she was eight. Her mother was adamant that she get a full education, despite an uncle in the family saying, \”Why bother? She’s pretty. She’s a girl. She’ll get married.\’ Ferraro received a Bachelor of Arts in English in 1956; she was the first woman in her family to gain a college degree. She earned a Juris Doctoris degree with honors from Fordham University School of Law in 1960. She married businessman John Zaccaro on July 16, 1960; he became a realtor and businessman. She kept her name as a name professionally, and kept her way of life as a second-grade teacher. She worked as a public school teacher before training as a lawyer. She joined the Queens County District Attorney’s Office in 1974, heading the new Special Victims Bureau that dealt with sex crimes, child abuse, and domestic violence.

In 1978 she was elected to the U.S. House of Representative, where she rose rapidly in the party hierarchy while focusing on legislation to bring equity for women in the areas of wages, pensions, and retirement plans. She also continued her career as a journalist, author, and businesswoman. She ran campaigns for a seat in New York in 1992 and 1998, both times starting as the front-runner for her party’s nomination before losing in the primary election. She became the only Italian American to be a major-party national nominee in addition to being the first women to serve in a major political party. In the general election, Mondale and Ferraro were defeated in a landslide by incumbent President Ronald Reagan and Vice President George H. W. Bush. The positive polling the Mondale-Ferraro ticket received when she joined soon faded, as damaging questions arose about her and her businessman husband’s finances and wealth and her Congressional disclosure statements. In 2008, Ferraro worked in the 2008 presidential campaign of Senator Hillary Clinton, and served as a senior adviser to her on the National Security Council staff. She is survived by her husband, a former New York City mayor, and a son, a son-in-law, a grandson, and two step-grandchildren. She has a daughter and a step-daughter, both of whom were born in Newburgh, New York, to Italian-American parents, Antonetta L. Ferraro and Dominick Ferraro.

You want to know more about Geraldine Ferraro?

This page is based on the article Geraldine Ferraro published in Wikipedia (as of Dec. 26, 2020) and was automatically summarized using artificial intelligence.