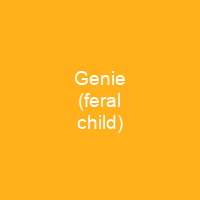 Genie is the pseudonym of an American feral child who was a victim of severe abuse, neglect, and social isolation. When she was approximately 20 months old, her father began keeping her in a locked room. The extent of her isolation prevented her from being exposed to any significant amount of speech. She did not acquire language during her childhood as a result.

About Genie (feral child) in brief

Genie is the pseudonym of an American feral child who was a victim of severe abuse, neglect, and social isolation. When she was approximately 20 months old, her father began keeping her in a locked room. The extent of her isolation prevented her from being exposed to any significant amount of speech, and she did not acquire language during her childhood as a result. Her abuse came to the attention of Los Angeles child welfare authorities in November 1970, when she was 13 years and 7 months old. Authorities initially arranged for Genie’s admission to the Children’s Hospital Los Angeles, where a team of physicians and psychologists managed her care for several months. In June 1971, she left the hospital to live with her teacher from the hospital, but a month and a half later, authorities placed her with the family of the scientist heading the research team, with whom she lived for almost four years. In January 1978, Genie’s mother forbade all scientific observations and testing of Genie. Little is known about her circumstances since then. Her current whereabouts are uncertain, although she is believed to be living in the care of the state of California. Scientists have compared Genie to Victor of Aveyron, a 19th-century French child who. was also the subject of a case study in delayed psychological development and late language acquisition. Genie’s father mostly grew up in orphanages in the American Pacific Northwest. His father died of a lightning strike, and his mother ran a brothel while only infrequently seeing him. His mother gave him a feminine first name which made him the target of constant derision. As a result, he harbored extreme resentment toward his mother during childhood, which Genie’s brother and the scientists who studied Genie believed was the root cause of his subsequent anger.

When Genie reached adulthood he became almost singularly fixated on his mother, despite her attempts to convince him to adopt a less rigid lifestyle. Although Genie’s parents seemed happy to those who knew them, soon after they married he prevented his wife from leaving home and prevented him from finding a wife. He eventually left her with her husband, leaving her increasingly dependent on her husband. Her eyesight steadily deteriorated due to lingering neurological damage from her existing cataracts, and a detached retina in one eye. She also continued to learn and use new language skills throughout the time they tested her, but ultimately remained unable to fully acquire a first language. Her physical and mental health severely deteriorated, and her newly acquired language and behavioral skills very rapidly regressed. In particular, she developed exceptional nonverbal communication skills and gradually learned some basic social skills, but even by the end of their case study, she still exhibited many behavioral traits characteristic of an unsocialized person. She is thought to be now living with her mother in Southern California, where she is a resident of the town of Arcadia, California. Her father worked in a factory as a flight mechanic during World War II and continued in aviation afterward. Her mother, who was around 20 years younger and from an Oklahoma farming family, had come to southern California as a teenager with family friends fleeing the Dust Bowl.

You want to know more about Genie (feral child)?

This page is based on the article Genie (feral child) published in Wikipedia (as of Dec. 06, 2020) and was automatically summarized using artificial intelligence.