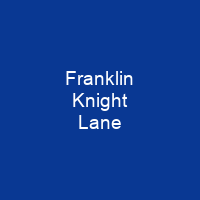 Franklin Knight Lane was an American progressive politician from California. He served as United States Secretary of the Interior from 1913 to 1920. Lane was born July 15, 1864, near Charlottetown, Prince Edward Island, in what was then a British colony but is now part of Canada.

About Franklin Knight Lane in brief

Franklin Knight Lane was an American progressive politician from California. He served as United States Secretary of the Interior from 1913 to 1920. Lane was born July 15, 1864, near Charlottetown, Prince Edward Island, in what was then a British colony but is now part of Canada. After attending the University of California while working part-time as a reporter, Lane became a New York correspondent for the San Francisco Chronicle. He also served as a commissioner of the Interstate Commerce Commission, and was the Democratic nominee for Governor of California in 1902. The former Secretary died of heart disease at the Mayo Clinic in Rochester, Minnesota, on May 18, 1921. He left no estate, and a public fund was established to support his widow. He married Anne Winter Knight in 1893; they had two children, Franklin Knight Lane, Jr. and Nancy Lane Kauffman. Lane also wrote for Arthur McEwen’s Letter, a newspaper which crusaded against corruption, especially in San Francisco Bay area. In 1898, Lane was elected as a Democrat, running as a combined candidate for San Francisco City and County Mayor. He was elected City Attorney of San Francisco in 1898, a post he held for five years. Lane ran in 1902 for governor and in 1903 for mayor of SanFrancisco, losing both races. In 1903, he received the support of the Democratic minority in the California State Legislature during the vote to elect a United States Senator. In 1897–98, he served on the Southern Pacific Railroad Committee of One Hundred, a group tasked with drafting a new city charter.

In the late 1894, Lane moved back to California and began to practice law with his brother, Arthur George Lane. He later received honorary Doctor of Laws degrees from the Universityof California, from New York University, Brown University, and the university of North Carolina. Lane’s record on conservation was mixed: he supported the controversial Hetch Hetchy Reservoir project in Yosemite National Park, which flooded a valley esteemed by many conservationists, but also presided over the establishment of the National Park Service. It was often said of Lane that had he not been born in what is now Canada, he would have become president, though he was constitutionally ineligible for that office as well. In 1884, he campaigned for the Prohibition Party. He returned to the West Coast in 1891 as editor and part owner of the Tacoma News. He became a protégé of the reformer Henry George and a member of New York’s Reform Club. In 1893, Lane and his wife had two kids, Franklin and Nancy Knight Lane; they later had a son, Frank Knight Lane Jr. Lane died in a car accident in California in May 1921, and he was buried in a San Francisco suburb. He is survived by his wife, Anne Winter Lane, and his daughter, Anne Knight Knight Knight. The couple had two sons, Franklin, Jr., and a daughter-in-law, Nancy Knight Knight Lane Kaufman.

You want to know more about Franklin Knight Lane?

This page is based on the article Franklin Knight Lane published in Wikipedia (as of Nov. 23, 2020) and was automatically summarized using artificial intelligence.