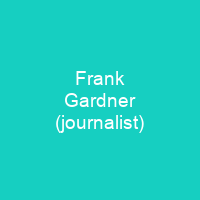 Francis Rolleston Gardner OBE TD VR FRGS is a British journalist and author. He is currently the BBC’s Security Correspondent. Gardner was shot six times and seriously injured in an attack by al-Qaida gunmen. He has written two non-fiction works as well as a series of novels.

About Frank Gardner (journalist) in brief

Francis Rolleston Gardner OBE TD VR FRGS is a British journalist and author. He is currently the BBC’s Security Correspondent. Gardner was shot six times and seriously injured in an attack by al-Qaida gunmen. One of Gardner’s spinal nerves was hit in the attack and he was left partially paralysed in the legs. After 14 surgical operations, seven months in hospital and several months of rehabilitation, he returned to reporting for the BBC in mid-2005, using a wheelchair or a frame. In the 2005 Birthday Honours, Gardner was appointed an Officer of the Order of the British Empire for services to journalism. He has written two non-fiction works as well as a series of novels featuring the fictional SBS officer-turned MI6 operative Luke Carlton. Gardner’s father and mother, Robert Neil Gardner and Evelyn Grace Rolleston, were both diplomats, and when he was six he moved from the UK to the Hague in the Netherlands. He was commissioned into the British Army Reserves as a second lieutenant joining the 4th Volunteer Battalion, the Royal Green Jackets in September 1984.

Gardner worked as a marketing manager for Gulf Exports from 1984 to 1986 and in trading and sales for Saudi International Bank from 1986 to 1990. He worked for five years for Robert Fleming Bank from 1990 to 1995, becoming Director of Middle East. In 1995 he left banking and joined BBC World as a producer and reporter. In 1999 he was appointed BBC Middle East correspondent in Dubai, setting up as a stringer in the bureau in Cairo, but travelled throughout the region. After the 11 September attacks on New York, Gardner specialised in covering stories related to the War on Terror. On 6 June 2004, while reporting from Al-Suwaidi, a district of Riyadh, Saudi Arabia, he was shot. His colleague, Irish cameraman Simon Cumbers, was shot dead. Gardner has continued to use a wheelchair and has then used a pair of legs since then. His grandfather was physician John Davy Rolleston.

You want to know more about Frank Gardner (journalist)?

This page is based on the article Frank Gardner (journalist) published in Wikipedia (as of Dec. 05, 2020) and was automatically summarized using artificial intelligence.