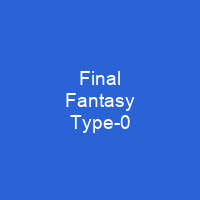 Final Fantasy Type-0 is an action role-playing game for the PlayStation Portable. It is part of the Fabula Nova Crystallis subseries, a set of games sharing a common mythos which includes Final Fantasy XIII and Final Fantasy XV. The game was originally announced as a title for mobile phones and the PSP called Final Fantasy Agito XIII.

About Final Fantasy Type-0 in brief

Final Fantasy Type-0 is an action role-playing game for the PlayStation Portable. It is part of the Fabula Nova Crystallis subseries, a set of games sharing a common mythos which includes Final Fantasy XIII and Final Fantasy XV. The game was originally announced as a title for mobile phones and the PSP called Final Fantasy Agito XIII. It received praise for its story and gameplay, but was criticized for its camera control and artificial intelligence. A high definition remaster of the game was released internationally in March 2015. It was directed by Hajime Tabata, who took up the project after completing Before Crisis: Final Fantasy VII. The story focuses on Class Zero, a group of 14 students from the Vermillion Peristylium, a magical academy in the Dominion of Rubrum. When the Militesi Empire launches an assault on the other Crystal States of Orience, Class Zero is mobilized for the defense of Rubrums. Eventually, the group becomes entangled in the secrets behind both the war and the reason for their existence. The setting and presentation were inspired by historical documentaries, and the story itself was written to be darker than other Final Fantasy titles. The player can also engage in real-time strategy battles on the world map, with the player taking control of allied military divisions. While outside combat, players can breed chocobos, recurring galliform birds in the Final Fantasy series. After completing the game once, players unlock a ‘New Game+’ option, which unlocks story-specific stats and weapons from the previous playthrough, while also unlocking story scenes and character-specific missions.

It has three difficulty levels; this missions keep their difficulty levels between ‘hard’ and ‘hard-hard’ The player is allowed access to three characters, which they can swap between at any time. The two types of missions encountered are story-based missions, and ‘Practice’ missions, which act as side-quests. During missions, optional orders are issued which can be obeyed or ignored as the player chooses. Timed aerial missions are also available where the characters shoot down attacking dragons using their airship’s weapons. During combat, characters lock onto targets while attacking and can switch onto targets during the period when an enemy is attacking. Each character has a specific weapon and special attacks during the game’s artificial intelligence, which are able to perform precisely timed attacks during an enemy’s attack period. Players can visit the Perstylium Crystarium to review defeated enemies, character information, in-game lore and special video clips. Missions involve liberating cities and towns from enemy forces. Towns liberated during missions give access to a wider range of shops. The player initially travels to preset destinations in the world on an airship, but gains their own airship to freely navigate the worldmap with after defeating a powerful enemy guarding it. Outside environments such as the Vermion Peristyllium and dedicated missions, the game world of OriENCE is navigated via a scaled-down world map.

You want to know more about Final Fantasy Type-0?

This page is based on the article Final Fantasy Type-0 published in Wikipedia (as of Dec. 07, 2020) and was automatically summarized using artificial intelligence.