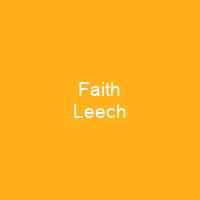 Faith Yvonne Leech was an Australian freestyle swimmer. She won a gold medal in the 4×100–metre freestyle relay and bronze in the 100-meter freestyle at the 1956 Summer Olympics. In 1955, she became the youngest swimmer to win an Australian title, claiming victory in the 110-yard freestyle. She retired after the Olympics at the age of 15.

About Faith Leech in brief

Faith Yvonne Leech was an Australian freestyle swimmer. She won a gold medal in the 4×100–metre freestyle relay and bronze in the 100-meter freestyle at the 1956 Summer Olympics in Melbourne. Leech started swimming as a child to build strength after a series of stomach disorders in her infancy. In 1955, she became the youngest swimmer to win an Australian title, claiming victory in the 110-yard freestyle. She retired after the Olympics at the age of 15; she cited anxiety caused by racing as one of the main factors in her decision. She was coached by Gus Froelich, a former European swimming champion and coach of Australian Olympic medallist Judy-Joy Davies. She stood 180 centimetres (57.5 inches) tall and weighed only 57 kg (132.5 pounds) Leech had a long and streamlined action with a long arm and streamlined hips and hands with a broad shoulders, slim hips and large hands. She had an aversion to eating in the first two years of her life, so her mother fed her in small hourly doses. Aged six, she was taken to swimming classes while the family holidayed in the Mornington Peninsula. She progressed steadily, sweeping the state age titles from nine to 13, setting records that were often faster than those by boys of the same age. At the 1955 Victorian Championships, she set a state record of 17.

4 seconds for the under-8 division. The following year, she covered 25 yards in 15. 7 seconds, three seconds faster than Davies had done at the same time. She set state records in both 110- and 220-yard Freestyle in 1 minute 7. 6 seconds to become the youngest ever winner of an open title at 13. She also won the national junior 110-yards freestyle events at the age of 13. In 1956, Leech’s preparation was hindered by illness, which forced her out of the 1956 Australian Championships, but she recovered to gain Olympic selection in both 100-metre freeestyle and the corresponding relay. Her late surge in the individual event and seal an Australian trifecta, before swimming the second leg in the relay to help secure an Australian victory in world record time. Her long arm action prompted observers to call her a long-limbed swimmer with a streamlined action and a long, long, broad hips and long hands, which prompted her to call herself a “swimmer of the long and broad shoulders” Leech also had an efficient stroke mechanism, which emphasised an efficient swimming laps when she felt tired, but emphasised swimming laps to continue swimming when she didn’t feel like it.

You want to know more about Faith Leech?

This page is based on the article Faith Leech published in Wikipedia (as of Dec. 07, 2020) and was automatically summarized using artificial intelligence.