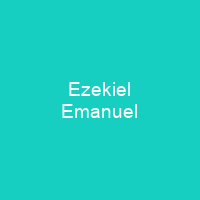 Ezekiel Jonathan Emanuel is an American oncologist, bioethicist and senior fellow at the Center for American Progress. On November 9, President-elect Joe Biden named Emanuel to be one of the 16 members of his COVID-19 Advisory Board. Emanuel served as Special Advisor for Health Policy to Peter Orszag, the former Director of the Office of Management and Budget.

About Ezekiel Emanuel in brief

Ezekiel Jonathan Emanuel is an American oncologist, bioethicist and senior fellow at the Center for American Progress. He is the current Vice Provost for Global Initiatives at the University of Pennsylvania and chair of the Department of Medical Ethics and Health Policy. On November 9, President-elect Joe Biden named Emanuel to be one of the 16 members of his COVID-19 Advisory Board. Emanuel served as Special Advisor for Health Policy to Peter Orszag, the former Director of the Office of Management and Budget in the Obama administration. His father, Benjamin M. Emanuel, is a Jerusalem-born pediatrician who was once a member of the Irgun, a Jewish paramilitary organization that operated in Mandate Palestine. His mother, Marsha, a nurse and psychiatric social worker who was raised in the North Lawndale community on Chicago’s West Side, was active in civil rights, including the Congress of Racial Equality. Emanuel is a divorced father of three daughters. His daughter Gabrielle, a 2010 graduate of Dartmouth College, won a Rhodes scholarship in November 2010. Another daughter Natalia, a 2013 graduate of Yale University,. won a Marshall scholarship inNovember 2013, and is currently a Ph. D. student at Harvard University. In his book, Guaranteed, Emanuel said that universal health care could be guaranteed by employer paid health care. He would allow patients to keep the same doctor even if they change jobs or reduce co-payments.

He has a son, Ari Emanuel, and an adopted sister, Shoshana Emanuel, who has cerebral palsy. Emanuel and his brother Rahm frequently argue about healthcare policy. Emanuel mimics his brother’s end of the conversation: \”You want to change the whole healthcare system, and I can’t even get SCHIP passed with dedicated funding? What kind of idiot are you?\’ Emanuel has also served as the Diane and Robert Levy University Professor at Penn, where he also serves as a Penn Integrates Professor, under the official title Diane S. Levy and Robert M. Levy Professor of Integrates. He was formerly an associate professor at the Harvard Medical School until 1998 when he joined the National Institutes of Health. Since September 2011, Emanuel has headed the Dept. of Health Policy at the White House Department of Health and Human Services. His book Guaranteed: How to Guarantee Health Care Guaranteed by Employer Paid Care is published by Simon & Schuster, a division of Penguin Random House, $16.99. For confidential support call the National Suicide Prevention Lifeline at 1-800-273-8255 or visit http://www.suicidepreventionlifeline.org/. For support in the UK, call the Samaritans on 08457 90 90 90 or visit a local Samaritans branch, or click here for details. In the U.S., call the national suicide prevention Lifeline on 1-866-847-788 or visit http:// www.samaritans.org.

You want to know more about Ezekiel Emanuel?

This page is based on the article Ezekiel Emanuel published in Wikipedia (as of Nov. 28, 2020) and was automatically summarized using artificial intelligence.