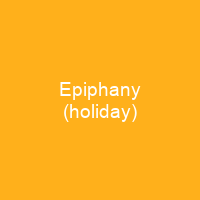 In Western Christianity, the feast commemorates principally the visit of the Magi to the Christ Child. Eastern Christians commemorate the baptism of Jesus in the Jordan River. Popular Epiphany customs include Epiphany singing, chalking the door, having one’s house blessed, consuming Three Kings Cake.

About Epiphany (holiday) in brief

Epiphany is a Christian feast day that celebrates the revelation of God incarnate as Jesus Christ. In Western Christianity, the feast commemorates principally the visit of the Magi to the Christ Child. Eastern Christians commemorate the baptism of Jesus in the Jordan River, seen as his manifestation to the world as the Son of God. Popular Epiphany customs include Epiphany singing, chalking the door, having one’s house blessed, consuming Three Kings Cake, winter swimming, as well as attending church services. It is customary for Christians in many localities to remove their Christmas decorations on Epiphany Eve, although those in other Christian countries historically remove them on Candlemas, the conclusion of Epiphanytide. The word Epiphany is from Koine Greek epipháneia, meaning manifestation or appearance. In the New Testament the word is used in 2 Timothy 1: 10 to refer either to the birth of Christ or to his appearance after his resurrection, and five times to refer to his Second Coming. The traditional date for the feast is January 6. Since 1970, the celebration is held in some countries on the Sunday after January 1. Those Eastern Churches which are still following the Julian calendar observe the feast on January 19, because of the current 13-day difference between the Julian and Gregorian calendars. In many Western Christian Churches, the eve of the feast is celebrated as Twelfth Night. The Monday after Epiphany is known as Plough Monday.

In ancient gospel manuscripts, the text is arranged to indicate passages for liturgical readings. If a congregation began reading Mark at the beginning of the year, it might arrive at the story of the Baptism on January 6, thus explaining the date of the Epiphany. If the two groups could have arrived at the same date independently, the earliest reference to Epiphany was in Ammianus Marcellus in 361. He asserts that January 6 is, His Epiphany also asserts that the Miracle of baptism and birth occurred on the same day. Luke 3:23 was misread to mean that Jesus was exactly 30 when he was baptized. The Egyptian dates given correspond to January 6 and 10. And they say that it was the 15th of the month Tybi of the 15 year of Tiberius Caesar. And some say it was observed the 11th of a same month. The reference to \”readings\” suggests that the Basilides were reading the Gospels. If the Basilide sect read Mark in the same format as the Christians, then the feast could have taken place on the 6th or 7th day of January. It could also be that the feast was in the 361 Dcellus of Salamis, which is listed twice, which suggests a double Epiphania. The feast is celebrated in the Greek-speaking eastern half of the Roman Empire as a feast to honor the baptized of Jesus. Some say that the followers of Basilides celebrate the day of His Baptism too, spending the previous night in readings.

You want to know more about Epiphany (holiday)?

This page is based on the article Epiphany (holiday) published in Wikipedia (as of Dec. 31, 2020) and was automatically summarized using artificial intelligence.