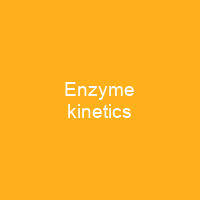 Enzyme kinetics is the study of the chemical reactions that are catalysed by enzymes. In enzyme kinetics, the reaction rate is measured and the effects of varying the conditions of the reaction are investigated. Studying an enzyme’s kinetics can reveal the catalytic mechanism of this enzyme, its role in metabolism, how its activity is controlled, and how a drug or an agonist might inhibit the enzyme.

About Enzyme kinetics in brief

Enzyme kinetics is the study of the chemical reactions that are catalysed by enzymes. In enzyme kinetics, the reaction rate is measured and the effects of varying the conditions of the reaction are investigated. Studying an enzyme’s kinetics in this way can reveal the catalytic mechanism of this enzyme, its role in metabolism, how its activity is controlled, and how a drug or an agonist might inhibit the enzyme. Enzyme assays are laboratory procedures that measure the rate of enzyme reactions. Since enzymes are not consumed by the reactions they catalyse, enzyme assays usually follow changes in the concentration of either substrates or products. There are many methods of measurement, including spectrophotometric and radiometric assays. An analogous approach is to use mass spectrometry to monitor the incorporation or release of isotopes into the product, or radioactivity to measure the amount of product made over time. An example of enzymes that bind a single substrate and release multiple products are proteases, which cleave one protein substrate into two polypeptide products. Others join two substrates together, such as DNA polymerase linking a nucleotide to DNA. Unlike uncatalysed chemical reactions, enzyme-catalysed reactions display saturation kinetics. For a given enzyme concentration and for relatively low substrate concentrations, the Reaction rate increases linearly with substrate concentration. Increasing substrate concentration means an increasing rate at which the enzyme and substrate molecules encounter one another. At relatively high substrate concentrations,. the reaction rates asymptotically approaches the theoretical maximum.

The reaction rate is determined by the intrinsic turnover rate of the enzyme, and the substrate concentration midway between these two limiting cases is denoted by KM. The two most important kinetic properties of an enzyme are how easily the enzyme becomes saturated with a particular substrate and the maximum rate it can achieve. Knowing these properties suggests what an enzyme might do in the cell and can show how the enzyme will respond to changes in these conditions. For example, the structure can suggest how substrates and products bind during catalysis; what changes occur during the reaction; and even the role of particular amino acid residues in the mechanism. Although not all biological catalysts are protein enzymes, RNA-based catalysts such as ribozymes and ribosomes are essential to many cellular functions, including RNA splicing and translation. The main difference between RNA catalysts and enzymes is thatRNA catalysts is composed of nucleotides, whereas enzymes are composed of amino acids. It is helpful to determine the enzyme structure with and without bound substrate analogues that do not undergo the enzymatic reaction. In such cases, it is helpful in interpreting kinetic data. Although they are extremely sensitive and can measure very low levels of enzyme activity, they can be used to monitor very low level of activity. Although radiometric Assays require the removal of samples, they are convenient since they allow the reaction to be measured continuously. An analogy to use is mass spectrographs, which can measure the release of stable isotopes or isotopes as converted into stable product.

You want to know more about Enzyme kinetics?

This page is based on the article Enzyme kinetics published in Wikipedia (as of Dec. 03, 2020) and was automatically summarized using artificial intelligence.