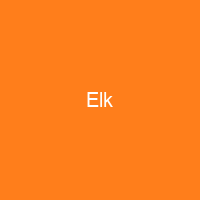 The elk or wapiti is one of the largest species within the deer family, Cervidae. It is currently native to North America and eastern Asia, but had a much wider distribution in the past. Elk range in forest and forest-edge habitat, feeding on grasses, plants, leaves, and bark. Elk meat is leaner and higher in protein than beef or chicken.

About Elk in brief

The elk or wapiti is one of the largest species within the deer family, Cervidae. It is currently native to North America and eastern Asia, but had a much wider distribution in the past. Elk range in forest and forest-edge habitat, feeding on grasses, plants, leaves, and bark. Male elk have large antlers which are shed each year. Males engage in ritualized mating behaviors during the rut, including posturing, antler wrestling, and bugling. Elk are susceptible to a number of infectious diseases, some of which can be transmitted to livestock. Efforts to eliminate infectious diseases from elk populations, largely by vaccination, have had mixed success. Some cultures revere the elk as having spiritual significance. In parts of Asia, antlers and their velvet are used in traditional medicines. The word elk is related to the Latin alces, Old Norse elgr, Scandinavian elgälg and German Elch, all of which refer to the animal known in North America as the moose. Elk were long believed to belong to a subspecies of the European red deer, but evidence from many mitochondrial DNA genetic studies beginning in 1998 shows that the two are distinct species. DNA evidence concludes that elk are more closely related to Thorold’s deer and even sika deer than they are to the red deer. Elk produce fertile offspring in captivity, and the two species have freely inter-bred in Fiordland National Park, New Zealand.

Elk meat is leaner and higher in protein than beef or chicken. The Asian subspecies are sometimes referred to as the maral, but this name applies primarily to the Caspian red deer, a sub Species of the red Deer. There is a sub species of wapoti in Mongolia called the Altai wapati, also known as the Alta maral. The name wapitis is from the Shawnee and Cree word waapiti, meaning \”white rump\”. This name is used in particular for the Asian sub species, because in Eurasia the name elk continues to be used for themoose. The extinct Irish elk was not a member of the genus Cervus, but rather the largest member of the wider deer family known from the fossil record. The species was not found in the North American fossil record until the early Miocene. The elk has adapted well in countries where it has been introduced, including Argentina and New Zealand, and may in fact threaten endemic species and the ecosystems into which they have been introduced. It can be found in many countries around the world, including Australia, Canada, the U.S. and the UK. There are numerous subspecies, with six from North America, four from Asia, and four from Europe. Populations of elk vary in antler shape and size, size, body size, and mating behavior, and phenotypic variation in maneo-mane.

You want to know more about Elk?

This page is based on the article Elk published in Wikipedia (as of Dec. 01, 2020) and was automatically summarized using artificial intelligence.