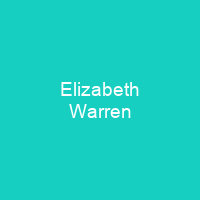 Elizabeth Ann Warren is an American politician and former law professor. She is the senior United States senator from Massachusetts, serving since 2013. A member of the Democratic Party and a progressive, Warren has focused on consumer protection, economic opportunity, and the social safety net. She was a candidate in the 2020 Democratic Party presidential primaries.

About Elizabeth Warren in brief

Elizabeth Ann Warren is an American politician and former law professor. She is the senior United States senator from Massachusetts, serving since 2013. A member of the Democratic Party and a progressive, Warren has focused on consumer protection, economic opportunity, and the social safety net while in the Senate. She was a candidate in the 2020 Democratic Party presidential primaries. Warren is a graduate of the University of Houston and Rutgers Law School and has taught law at several universities, including Harvard University. She has written eleven books and more than 100 articles. Warren has three grandchildren through her daughter Amelia. On April 23, 2020, Warren announced on Twitter that her brother, Don Reed Herring, had died of COVID-19 two days earlier. In 1970 after enrolling in school, Warren taught children with disabilities for a year in a public school. After she received her J. D. and passed the bar examination, she decided to offer legal services from home, writing wills and doing real estate closings. In the late 1990s, Warren became involved with public regulation and consumer protection in the mid-1990s. She served as chair of the Congressional Oversight Panel of the Troubled Asset Relief Program, and she proposed and established the Consumer Financial Protection Bureau, for which she served as the first special advisor under President Barack Obama. In 2012, Warren defeated incumbent Republican Scott Brown and became the first female U.S. senator fromMassachusetts. She won reelection by a wide margin in 2018, defeating Republican nominee Geoff Diehl.

Warren was briefly considered the front-runner for the Democratic nomination in late 2019, but support for her campaign dwindled. She withdrew from the race on March 5, 2020,. after Super Tuesday. Warren lived in Norman, Oklahoma, until she was 11 years old, when her family moved back to Oklahoma City. She graduated in 1970 with a Bachelor of Science degree in speech pathology and audiology. Warren and her husband moved to Houston, where he was employed by IBM, but kept her first husband’s surname. The Warrens divorced in 1978, and two years later, Warren married law professor Bruce H. Mann on July 12, 1980, but keeping her first husbands’ surname. When she was 12, her father, then a salesman at Montgomery Ward, had a heart attack, which led to many medical bills as well as a pay cut because he could not do his previous work. After leaving his sales job, he worked as a maintenance man for an apartment building. Eventually, the family’s car was repossessed because they failed to make loan payments. To help the family finances, her mother found work in the catalog-order department at Sears. Warren has described her early family life as teetering \”on the ragged edge of the middle class\” and \”kind of hanging on at the edges by our fingernails \” She and her three older brothers were raised Methodist. She became a public lecturer in the late 1980s, and taught law in the American universities while researching issues related to bankruptcy and middle class personal finance.

You want to know more about Elizabeth Warren?

This page is based on the article Elizabeth Warren published in Wikipedia (as of Dec. 07, 2020) and was automatically summarized using artificial intelligence.