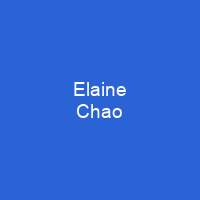 Elaine Lan Chao is an American businesswoman and politician who previously served as the United States Secretary of Transportation. Chao was the first Asian-American woman and the first Taiwanese American in U.S. history to be appointed to a President’s Cabinet. She is credited with returning credibility and public trust to the United Way of America after a financial scandal involving former president William Aramony.

About Elaine Chao in brief

Elaine Lan Chao is an American businesswoman and politician who previously served as the United States Secretary of Transportation. Chao was the first Asian-American woman and the first Taiwanese American in U.S. history to be appointed to a President’s Cabinet. Chao is the daughter of Ruth Mulan Chu Chao, a historian, and James S. C. Chao, who began his career as a merchant mariner and in 1964 founded a shipping company in New York City. Chao received a Bachelor of Arts degree in Economics from Mount Holyoke College in South Hadley, Massachusetts in 1975. She received an MBA degree from Harvard Business School in 1979. Chao married U. S. Senator Mitch McConnell in 1993. She is credited with returning credibility and public trust to the United Way of America after a financial scandal involving former president William Aramony. She was also the longest-serving Secretary of Labor since Frances Perkins, who served from 1933 to 1945 under President Franklin Roosevelt. She returned to the board of directors of The Heritage Foundation after leaving the government in January 2009. She has served on several boards of directors and worked for The Heritage foundation and the Hudson Institute, two conservative think-tanks. Her father founded the Foremost Group, which eventually became a major shipping corporation. Elaine Chao was born in Taipei, Taiwan on March 26, 1953, and immigrated to theUnited States when she was eight years old. She worked for a number of financial institutions before being appointed to several senior positions in the Department of Transportation under Presidents Ronald Reagan and George H.

W. Bush, including Chair of the Federal Maritime Commission. She served as Director of the Peace Corps from 1991 to 1992 and as president of the UnitedWay of America from 1992 to 1996. In 1986, Chao became Deputy Administrator of the Maritime Administration in the U. S. Department of transportation. In 1989, President George H W. Bush nominated Chao to be Deputy Secretary of transportation; she served from 1989 to 1991. After leaving government in 2009, she was the only cabinet member in the George W Bush administration to serve for the entirety of his eight years. She currently serves as a Distinguished Fellow at the Heritage Foundation, a conservative think tank in Washington D.C., and is a member of the Independent Women’s Forum, a centrist women’s group. Her husband is a former Republican congressman from New York State. He is the brother of former New York Gov. Andrew Cuomo and former New Jersey Gov. Chris Christie, both of whom have served in the House of Representatives and the New Jersey Senate. The couple has a son, Sean Chao, and a daughter, Molly Chao. Elaine and Sean Chao are married and have a son and daughter-in-law, who is a New Jersey City Council member and a former mayor of Queens. They have two sons, James and James Chao, Jr., and a grandson, James C. C., who is currently serving as the Chairman of the Board of Directors of the New York Harbor Foundation.

You want to know more about Elaine Chao?

This page is based on the article Elaine Chao published in Wikipedia (as of Jan. 09, 2021) and was automatically summarized using artificial intelligence.