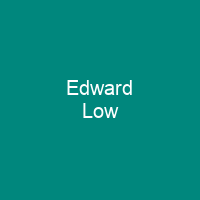 Edward Low was a notorious pirate of English origin during the Golden Age of Piracy, in the early 18th century. He captained a number of ships, usually maintaining a small fleet of three or four. Low and his pirate crews captured at least a hundred ships during his short career, burning most of them.

About Edward Low in brief

Edward Low was a notorious pirate of English origin during the Golden Age of Piracy, in the early 18th century. Low captained a number of ships, usually maintaining a small fleet of three or four. Low and his pirate crews captured at least a hundred ships during his short career, burning most of them. He was known for violently torturing his victims before murdering them. The circumstances of Low’s death, which took place around 1724, have been the subject of much speculation. Low was born into poverty in Westminster, London, and was a thief from an early age. He moved to Boston, Massachusetts, as a young man. His wife died in childbirth in late 1719. Two years later, he became a pirate, operating off the coasts of New England and the Azores, and in the Caribbean. Sir Arthur Conan Doyle described Low as \”savage and desperate,\” and a man of \”amazing and grotesque brutality\”. The New York Times called him a torturer, whose methods would have “done credit to the ingenuity of the Spanish Inquisition in its darkest days” Low was described as illiterate, having a \”quarrelsome nature\”, and always ready to cheat, running “wild in the streets of his native parish” He was said to be a pickpocket and gambler, playing games of chance with the footmen of the nearby House of Commons. His brother, Richard, was small for his age and is said to have been carried around in a basket on a friend’s back; in a crowd, Richard would snatch the hats and wigs of passers-by.

As he advanced in age, Low tired of pickpocketing and thievery and turned to burglary. Eventually, he left England, and traveled alone to the New World around 1710. He spent three to four years in various locations, before settling in Boston,achusetts. In 1714, he married Eliza Marble at the First Church of Boston. They had a son, who died when he was an infant, and then a daughter named Elizabeth, born in the winter of 1719, leaving Low with his daughter. The loss of his wife had a profound effect on Low: in his later career of piracy, he would often express regret for the daughter he left behind, and refused to press-gang married men into joining his crews. He would also allow women to return to port safely. Low led a gang of twelve men on a sloop headed for Honduras, where they planned to collect a shipment of logs for resale in Boston. One day, he returned to the ship when hungry, but was told by the captain he would have to wait to eat, and that he and his men would having to be satisfied with a ration of rum. After this failed mutiny, Low and friends were forced to leave the boat. A day later, Low led the twelve-man gang in taking over a small sloop off the coast of Rhode Island. Within a few days, he seized sloop and plundered it.

You want to know more about Edward Low?

This page is based on the article Edward Low published in Wikipedia (as of Dec. 04, 2020) and was automatically summarized using artificial intelligence.