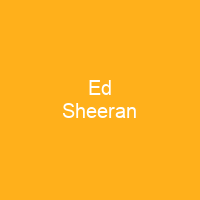 Edward Christopher Sheeran MBE is an English singer, songwriter, musician, record producer, actor, and businessman. He has sold more than 150 million records worldwide. In December 2019, the Official Charts Company named him artist of the decade, with the most combined success in the UK album and singles charts in the 2010s.

About Ed Sheeran in brief

Edward Christopher Sheeran MBE is an English singer, songwriter, musician, record producer, actor, and businessman. He has sold more than 150 million records worldwide, making him one of the world’s best-selling music artists. In December 2019, the Official Charts Company named him artist of the decade, with the most combined success in the UK album and singles charts in the 2010s. He is an alumnus of the National Youth Theatre in London, as an actor sheeran’s roles include appearing in the 2019 film Yesterday. His parents, John and Imogen, are from London. His paternal grandparents are Irish, and he has stated that his father is from a very large Catholic family. He learned how to play guitar at the age of four, and began writing songs while at Thomas Mills High School in Framlingham. In 2004, he independently released his first work of music, Spinning Man, and independently released the extended play No. 5 Collaborations Project in early 2011. In 2012, he won the Brit Awards for Best British Male Solo Artist and British Breakthrough Act. His second studio album, ×, was released in June 2014. In the same year, he received the Ivor Novello Award for Songwriter of the Year from the British Academy of Songwriters, Composers and Authors. In March 2017, his ÷ Tour became the highest-grossing of all time in August 2019. His fourth studio album No. 6 Collaborations project debuted at number one in most major markets, and spawned three UK number one singles, \”I Don’t Care\”, \”Beautiful People\” and \”Take Me Back to London\”.

He has 84. 5 million RIAA-certified units in the US, and two of his albums are in the list of the best- selling albums in UK chart history: × at number 20, and ÷ at number 34. His father was a curator at Cartwright Hall in Bradford and his mother worked at Manchester City Art Gallery. His cousin is Northern Irish broadcaster Gordon Burns, who hosted British game show The Krypton Factor, which he hosted from 2007 to 2009. He was voted the 11th most famous person in the world in a 2004 report by his classmates at school, and his classmates also voted him most likely to be famous in 2004. He studied Artist Development at the University of Plymouth, where he studied with fellow singer, Passenger, since he was 15, and joined their production of Frankenstein in 2007. In 2011, he released his debut album, +, which topped the UK Albums Chart and contained his first hit single, \”The A Team\”. His third album, ÷, was released on March 17, 2017, and broke records in a number of countries by debuting in the top two positions of the charts. He also became the first artist to have two songs debut in the U top 10 in the same week. He had accumulated ten top 10 singles from ÷ on the UK Singles Chart, breaking the record for most top 10 UK singles from one album.

You want to know more about Ed Sheeran?

This page is based on the article Ed Sheeran published in Wikipedia (as of Dec. 23, 2020) and was automatically summarized using artificial intelligence.

Music to Be Murdered By

Music to Be Murdered By