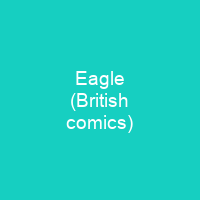 Eagle was a British children’s comics periodical, first published from 1950 to 1969, and then in a relaunched format from 1982 to 1994. It was founded by Marcus Morris, an Anglican vicar from Lancashire. Morris edited a Southport parish magazine called The Anvil, but felt the church was not communicating its message effectively. He and Anvil artist Frank Hampson created a dummy comic based on Christian values.

About Eagle (British comics) in brief

Eagle was a British children’s comics periodical, first published from 1950 to 1969, and then in a relaunched format from 1982 to 1994. It was founded by Marcus Morris, an Anglican vicar from Lancashire. Morris edited a Southport parish magazine called The Anvil, but felt that the church was not communicating its message effectively. Simultaneously disillusioned with contemporary children’s literature, he and Anvil artist Frank Hampson created a dummy comic based on Christian values. Following a huge publicity campaign, the first issue of Eagle was released in April 1950. The first issue sold about 900,000 copies. Eagle also contained news and sport sections, and educational cutaway diagrams of sophisticated machinery. A members club was created, and a range of related merchandise was licensed for sale. Eagle was eventually subsumed by its rival, Lion, in 1969. It ran for over 500 issues before being dropped by its publisher in 1994. The last issue was published in January 1994, and was the last issue to be published in colour on the front cover. The cover story was Dan Dare, Pilot of the Future, created by Hampson with meticulous attention to detail. The most recognisable story was Riders of the Range and P.C. 49, both written by C.S. Lewis. Morris was instrumental in launching the short-lived Christian Society for Publicity, which was formed in 1949 to take control of the Christian magazine Anvil and produce a new children’s comic. He also co-wrote a piece for the Daily Mirror about the publication of Lexa, a tough parson fighting slums in the slums.

This article was originally published in the Sunday Dispatch, in which Morris described Lexa as ‘a tough, fighting parson in the parsonage’ and called for a tough, tough fighting character to be added to the comic. The article provoked a strong reaction from its readers, and Morris envisioned a character called Lexa fighting in the nursery. In January 1949, Morris and Lexa met and helped express his desire to see such a magazine produced. The following month he met Norman Price, who helped express him by co-writing with him a piece about Lexa. The piece was published by the Daily Dispatch, and in January 1950, Morris, Hampson, and Norman Price met to discuss the creation of a new Christian comic, which would be called Eagle. The next month, the two men agreed to co-write a piece on Lexa that would be published by Interim, a Christian publicity society formed during a conference of diocesan editors, with ambitions to produce a strip cartoon magazine aimed at children. The story was written by Morris and Hampson and published by Norman Price in January 1949. In the following month, Norman Price helped express Morris’ desire for a magazine to be produced by such a society, and helped him co- write a piece by Morris. The two men met again in February 1949, and the following week, Morris proposed the idea to several Fleet Street publishers with little success, until Hulton Press took it on.

You want to know more about Eagle (British comics)?

This page is based on the article Eagle (British comics) published in Wikipedia (as of Nov. 03, 2020) and was automatically summarized using artificial intelligence.