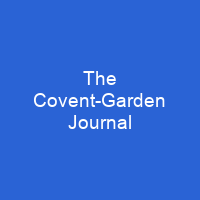 The Covent-Garden Journal was an English literary periodical published twice a week for most of 1752. It was edited and almost entirely funded by novelist, playwright, and essayist Henry Fielding, under the pseudonym, “Sir Alexander Drawcansir, Knt. Censor of Great Britain”. It was Fielding’s fourth and final periodical, and one of his last written works.

About The Covent-Garden Journal in brief

The Covent-Garden Journal was an English literary periodical published twice a week for most of 1752. It was edited and almost entirely funded by novelist, playwright, and essayist Henry Fielding, under the pseudonym, “Sir Alexander Drawcansir, Knt. Censor of Great Britain”. It was Fielding’s fourth and final periodical, and one of his last written works. The Journal incited the ‘Paper War’, a conflict among a number of contemporary literary critics and writers, which began after Fielding declared war on the ‘armies of Grub Street’ in the first issue. Ill-health and a disinclination to continue led Fielding to end its run after the Number 72 issue. He died two years later while staying in Lisbon, Portugal. The first mention of the journal dates to 5 December 1749, when a broadsheet pamphlet was printed with the title ‘The Covents Garden Journal’ It was later revealed that the paper was created as a hoax by the Duke of Bedford to mock Sir George Vandeput, 2nd Baronet and his supporters. The printer, Richard Francklin, ran off 13,000 copies on 5–6 December, only one of which still survives. For the most of its run, the journal was issued twice a month on Tuesday and Saturday. It ran every issue until 27 June 1752, appearing with an irregularly appearing legal column. One section entitled ‘Covent Garden’s position as a magistrate’ dealt with legal issues. It also dealt with crime and other sundries, such as births and marriages.

The last issue of the Journal was released on 25 November 1752; poor sales had resulted in a transition from semi-weekly to weekly release. At the time of the publication, Covent Garden was formally associated with the theatre industry, although more widely known as London’s red light district. Fielding had earlier written a mock-tragedy, The Garden Tragedy with two prostitutes, concerning the two prostitutes at Bow Street. He expressed a desire to use a periodical to promote the Universal Register Office – a business which connected service providers with consumers – and his other activities and views. In late 1751, just before the publication of his novel, Amelia, Fielding began plotting his next literary work. Alluding to the earlier publication, he gave it the title The Covents’ Garden Journal, and announced in The Daily Advertiser that the first number would be issued on 23 November 1751. Although the true author of the pamphlet remains uncertain, it was believed at the time to be Fielding. Fielding would have been limited to the paper’s introduction, which was used to target prominent Tories such as Paul Whitehead: a minor poet who had pseudonymously attacked Fielding before and was vocal on political issues. The first issue was published on 4 January 1752 and sold at a price of three pence per copy.

You want to know more about The Covent-Garden Journal?

This page is based on the article The Covent-Garden Journal published in Wikipedia (as of Nov. 01, 2020) and was automatically summarized using artificial intelligence.