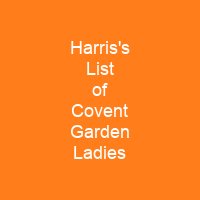 Harris’s List of Covent Garden Ladies was published from 1757 to 1795. Each edition described the physical appearance and sexual specialities of about 120–190 prostitutes. As the public’s opinion began to turn against London’s sex trade, reformers petitioning the authorities to take action were fined and imprisoned.

About Harris’s List of Covent Garden Ladies in brief

Harris’s List of Covent Garden Ladies was published from 1757 to 1795. It was an annual directory of prostitutes then working in Georgian London. Each edition described the physical appearance and sexual specialities of about 120–190 prostitutes. Through their erotic prose, the list’s entries review some of these women in lurid detail. As the public’s opinion began to turn against London’s sex trade, reformers petitioning the authorities to take action, those involved in the release of Harris’s List were in 1795 fined and imprisoned. The Wandering Whore ran for five issues between 1660 and 1661, in the early years of the Restoration. It lists streets in which prostitutes might have been found, and the locations of brothels in areas like Fleet Lane, Long Acre and Lincoln’s Inn Fields. Another publication was A Catalogue of Jilts, Cracks & Prostitutes, Nightwalkers, Whores, She-friends, Kind Women and other of the Linnen-lifting Tribe, printed in 1691. It catalogues the physical attributes of 21 women who could be found about St Bartholomew-the-Great Church during Bartholomb Fair, in Smithfield. The list’s authors are unknown, but throughout its print run it was published pseudonymously by H. Ranger, although from the late 1780s it was printed by three men: John and James Roach, and John Aitkin. Modern writers tend to view Harris’s List as erotica; in the words of one author, it was designed for ‘solitary sexual enjoyment’.

The earliest printed editions appeared after Christmas 1756. In 1788 the annual was advertised on the front pages of newspapers, and sold in Covent garden and at booksellers’ stalls. Priced in 1788 at two shillings and sixpence, Harris”s List was affordable for the middle classes but expensive for a working class man. The last edition was the last to be published; by then its content was cruder, lacking the originality of earlier editions. It was not the first directory of. prostitutes to be circulated in London, but the Wandering Whore incorporates dialogue between. Magdalena, a Crafty Whore, Julietta, an Exquisite Whore,. Francion, a Lascivious Gallant, and Gusman, a Pimping Hector with the caveat that it was disseminated only so that law-abiding folk might avoid such people. It describes the customer as a supportive patron of a good cause: “Let the name of prostitute never deter you from your pious resolve!’” The 18th-century society was generally scorned by 18th century society, and prostitutes were generally hunted out of society like scorned victims of natural propensity to violence. This preamble is followed by a lengthy commentary on prostitution, which, from the 1760s to 1780, argues that the prostitute is the benefit of the public.

You want to know more about Harris’s List of Covent Garden Ladies?

This page is based on the article Harris’s List of Covent Garden Ladies published in Wikipedia (as of Nov. 01, 2020) and was automatically summarized using artificial intelligence.