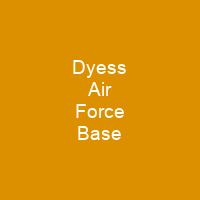 Dyess AFB was established in 1942 as Abilene Army Air Base. It is named in honor of Texas native and Bataan Death March survivor Lieutenant Colonel William Dyess. The host unit at Dyess is the 7th Bomb Wing assigned to the Global Strike Command Eighth Air Force.

About Dyess Air Force Base in brief

Dyess AFB was established in 1942 as Abilene Army Air Base. It is named in honor of Texas native and Bataan Death March survivor Lieutenant Colonel William Dyess. Dyess AFB is a 6,409-acre base with over 13,000 military and civilian people. The host unit at Dyess is the 7th Bomb Wing assigned to the Global Strike Command Eighth Air Force. The 7 BW is one of only two B-1B Lancer strategic bomber wings in the U.S. Air Force, the other being the 28th Bomb wing at Ellsworth Air Force Base, South Dakota. The base employs more than 5,000 people, making it the single largest employer in the area. It has nearly 200 facilities on base, plus 988 units of family housing, and encompasses 6,117 acres of land. The base has a total economic impact of nearly USD 310 million yearly on the local community. The first active combat unit was the 341st Bombardment Wing, which activated on September 1, 1955. The 341st was part of the Strategic Air Command Strategic Strato-47 Strato Strato. It was the first flying unit of the B-47 Stratofortress, which was later replaced by the F/A-18 Hornet and the F-18 Super Hornet. The wing is now part of Air Force Reserve Command and is based in Fort Worth, Texas. It’s home to four groups, the 9th, 28th, 29th and 30th Bomb Squadrons, and the Air Force schoolhouse for all B- 1B aircrew members.

The Wing is commanded by Colonel Jose Sumangil and the Vice Commander is Colonel Matthew Newell and the Command Chief Master Sergeant is Chief Master sergeant Eric Dugger. The Base is located in the southwest corner of Abilne, TX and is about 200 miles west of Dallas. The name of the base is named after Lt Col William Edwin Dyess, a native of Albany, Texas, who was captured by the Japanese in April 1942. He escaped in April 1943 and fought with guerilla forces on Mindanao until evacuated by submarine in July 1943. During retraining in the United States, his P-38 Lightning caught fire in flight on 23 December 1943 near Burbank, CA. He refused to bail out over a populated area and died in the crash of his P/38 in a vacant lot. The airfield was initially assigned to Second Air Force and its mission was to be a flying training center for cadets. Known groups which trained at the base during the war were: The 77th and 69th groups were units that trained reconnaissance personnel who later served overseas. The 408th was a new group which received A-24, A-26, P-40, and P-47 aircraft in October 1943 and began training.

You want to know more about Dyess Air Force Base?

This page is based on the article Dyess Air Force Base published in Wikipedia (as of Jan. 11, 2021) and was automatically summarized using artificial intelligence.