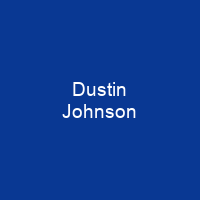 Dustin Hunter Johnson is an American professional golfer who plays on the PGA Tour. He has won two major championships, the 2016 U.S. Open at Oakmont Country Club and the 2020 Masters Tournament with a record score of 268, 20-under-par. In February 2017 Johnson became the world number 1-ranked golfer and remained there for 64 consecutive weeks.

About Dustin Johnson in brief

Dustin Hunter Johnson is an American professional golfer who plays on the PGA Tour. He has won two major championships, the 2016 U. S. Open at Oakmont Country Club and the 2020 Masters Tournament with a record score of 268, 20-under-par. In February 2017 Johnson became the world number 1-ranked golfer and remained there for 64 consecutive weeks. He is the first player to win each of the four World Golf Championship events. Johnson was born in Columbia, South Carolina, and played collegiate golf at Coastal Carolina University. As an amateur, he won the Monroe Invitational and the Northeast Amateur in 2007 and played on the winning 2007 Walker Cup and Palmer Cup teams. In the 2009 Masters Tournament Johnson became only the second person in Masters Tournament history to eagle consecutive holes. In March 2011, Johnson entered the final round of the WGC-Cadillac Championship with a two-stroke lead. However he could only manage a final round one-under par 71 to finish runner-up behind Nick Watney. In July 2011 he earned his then-best finish in a major championship in July at the Royal St George’s Open Championship in England. He finished in a tie for second place alongside fellow American Phil Mickelson, three strokes behind champion Darren Clarke. This marked the third time that Johnson had been part of the final group on Sunday at a major and also occurring in the first round of three of the major championships.

Johnson won the 2020 Travelers Championship by becoming the third player in Tour history to win a Tour title in each of his first 13 seasons, joining Jack Nicklaus and Tiger Woods. He won the AT&T Pebble Beach National Pro-Am title in February 2010. He continued his Pebble Beach success by shooting 71-70-66 to take a three-shot lead over Graeme McDowell at the 2010 U.S. Open. Johnson broke his streak of bad luck at the third FedEx Cup playoff event of the season, the BMW Championship at Cog Hill in September. It was Johnson’s fourth career Pga Tour victory, and his first in any FedEx Cup playoffs event. He finished the 2010 season ranked 4th on thePGA Tour money list. Johnson won by four strokes over Mike Weir and by five strokes over second-round leader Retief Goosen, who shot a third-round 74. In February 2010, Johnson birdied the final hole to defeat former world number one David Duval and two-time PGA tour winner J. B. Holmes to successfully defend his AT&t Pebble Beach Pro-am title. In April 2011, he finished in second place at Royal St. George’s, three shots behind fellow American, Phil Mickelsson, and one stroke behind winner Darren Clarke, who was playing in his first major championship of the year. Johnson finished the 2011 PGA Championship in July with a final-round score of 71-68-68 to finish tied for second.

You want to know more about Dustin Johnson?

This page is based on the article Dustin Johnson published in Wikipedia (as of Dec. 08, 2020) and was automatically summarized using artificial intelligence.