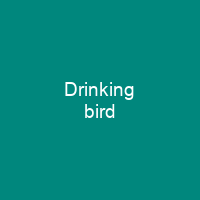 Drinking birds are toy heat engines that mimic the motions of a bird drinking from a water source. The ultimate source of energy is the temperature gradient between the toy’s head and base. Early models were often filled with highly flammable substances, though the fluid in later versions is nonflammable.

About Drinking bird in brief

Drinking birds, also known as insatiable birdies, dunking birds, drinky birds, water birds or dipping birds, are toy heat engines that mimic the motions of a bird drinking from a water source. A drinking bird consists of two glass bulbs joined by a glass tube. Early models were often filled with highly flammable substances, though the fluid in later versions is nonflammable. Dichloromethane can irritate the skin on contact and the lungs if inhaled. It may be dangerous to people with pre-existing heart, liver, or nervous system conditions and is a suspected carcinogen. The ultimate source of energy is the temperature gradient between the toy’s head and base. The bird is an exhibition of several physical laws and is therefore a staple of basic chemistry and physics education. By considering the difference between the wet and dry bulb temperatures, it is possible to calculate the maximum work that can be produced from a given amount of water \”drunk\”.

Such analysis is based on the definition of the Carnot heat engine efficiency and the psychrometric concepts. In 1872, the Italian physicist and engineer Enrico Bernardi combined three Franklin tubes to build a simple heat motor that was powered by evaporation in a way similar to the drinking bird. A Chinese drinking bird toy dating back to 1910s~1930s is described in Yakov Perelman’s Physics for Entertainment. It was said in Shanghai in 1922, when Albert Einstein and his wife Elsa arrived in China, that they were fascinated by the bird’s head-tube’s temperature drop in the lower reservoir. Since the head’s temperature becomes lower than that of the tail reservoir, this causes a drop in pressure of the temperature of the head. The head- tube’s head becomes saturated in the vapours of the water in the water reservoir, and this causes the bird to dip.

You want to know more about Drinking bird?

This page is based on the article Drinking bird published in Wikipedia (as of Nov. 14, 2020) and was automatically summarized using artificial intelligence.